So this year, I decided to try something new and use Memoria Press Curriculum as my spine for homeschooling my second grader and kindergartener. I’ve never really done an out of the box solution before (and really, I’m barely doing it now) so I didn’t know how it would go. I’m kind of a picky two-year old in that I like to do it all myself. I wanted to switch to a more classical style and also wanted less burden on me so I chose Memoria Press as my basis for the 2015-2016 school year. 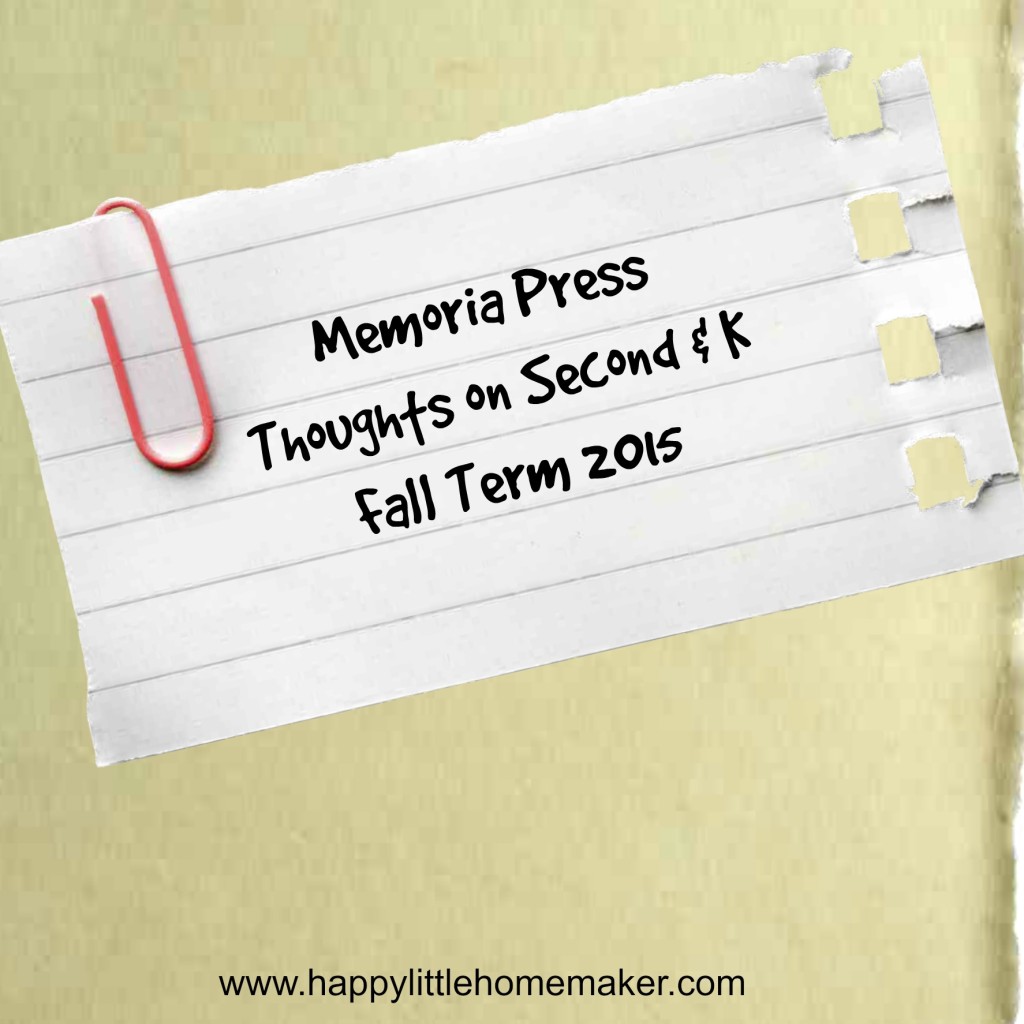 Here is what we used (or not) and what we thought about the various subjects in the second grade & kindergarten programs.

So I mentioned earlier that I didn’t plan on doing this and we haven’t. We have been using Classically Catholic Memory and have loved it due to the fact it’s all on audio CD’s. We listen to them everyday and it’s pretty passive on my part. That said, I love that recitation is included and would use it again. I think it’s a pretty important skill — memorizing knowledge & being able to speak well.

We have been doing Prima Latina for several weeks and I think she mostly likes it. She dislikes the handwriting parts but loves the Latin prayer & changes the words in Mass whenever she knows the Latin equivalent. I may have to take her to a Latin Mass again this year. Overall, it’s working.

I actually sent back all the workbooks & teacher books for these. Instead, we will read the books aloud and discuss via the Teaching the Classics method of Socratic discussion.

I don’t remember what I SAID we were using, but I know it wasn’t Rod & Staff. We’ve been using Math Mammoth workbooks to solidify & review the basics.

We haven’t done any copywork or scripture memory yet this year. I’ve decided to get rid of spelling and work on this instead.

She already knows cursive so now it’s just committing those letters to memory & working on her penmanship through every other assignment.

We are really loving the picture books suggested for both grades. In fact, they both listen to each other’s books for all the literature, science, and history/culture selections. We’ve bought a few we liked and added a few others to our wish list (mostly seasonal titles). I have not used the enrichment guides or craft book yet; it’s still been nice enough that sending them outside has been more important. Perhaps in the winter I will get to more discussion & crafts with the books.

We haven’t been using MP for this and haven’t been giving much attention to it honestly. We read a little & play with the phonogram app. It has fallen off the map in favor of sunshine. Again, more in winter, I think.

Ugh. Utter disaster. I cannot get her to remember a list of spelling words no matter what we try. We literally worked on the first list for 4 weeks and made NO progress. I notice that many people don’t start spelling until third grade, so removing it from the list until next year. I may use Sequential Spelling

Overall, I’ve really liked the plan out laid by Memoria Press. We don’t do everything with the same materials, but I absolutely love it as a starting point for the year’s plan. I think their book lists are phenomenal and love the subjects and timeline on which they cover them.

Do you use a box curriculum or do you build your own plan?