I don’t mind science but as I added more students, I decided to concentrate on doing the basics REALLY well. Something had to give and with my early elementary kiddos, science is one of those. I refuse to take the time on a science curriculum that doesn’t “stick,” ya know? 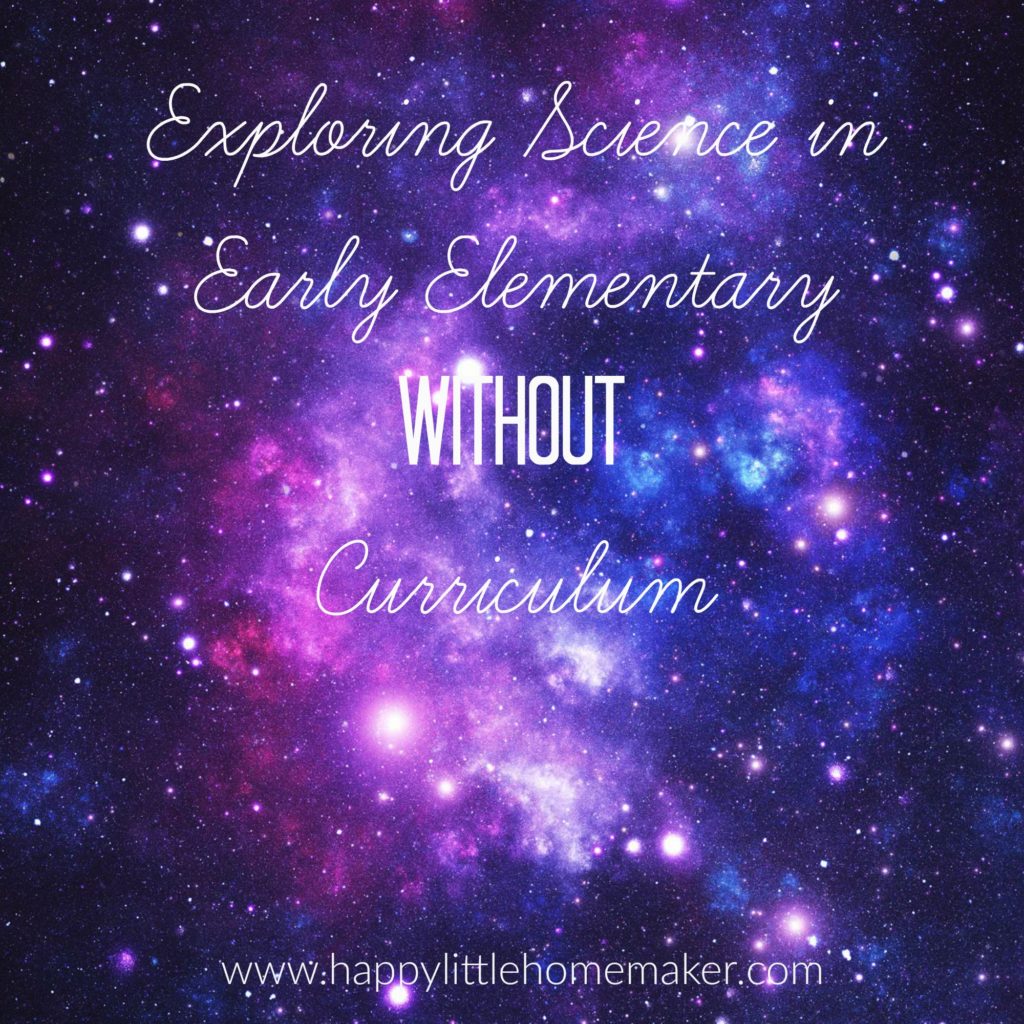 That being said, here are several ways my kids learn about science without doing a science curriculum. 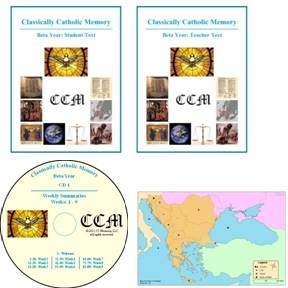 Because we don’t have a science curriculum, one of the pieces of Classically Catholic Curriculum we use is the science memorization portion. For the year we are on, it is simply Q & A about earth science, so they are memorizing things about types of mountains, kinds of rock and more.

Each day during Morning Time we do a quick nature observation on a calendar. We look at the temperature, observe whether it’s cloudy or snowy, check the sunrise, sunset & amount of daylight and make an observation out our front window each day.

In addition, I started making an annual nature study plan. I pick one broad topic per quarter and check out library books, watch videos, and find a few (super quick, no-prep) activities from the Ultimate Naturalist Library. I try do read a book & do a quick activity once a week. 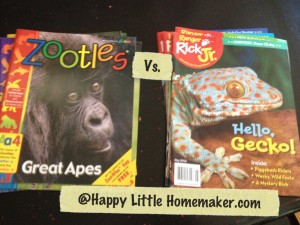 Sometimes I will read from Ranger Rick instead of a book and sometimes this leads to a rabbit trail of more books on a subject. While the article linked above is about Ranger Rick Jr, we have upgraded to Ranger Rick and it is VERY similar.  Basically it has longer articles & more information.

In true Charlotte Mason tradition, kids connect with stories that connect their hearts with a subject. While the series I share above may not be “living books” in the strictest sense, my kids love these stories and retain an amazing amount from them, which is good enough for me!

Magic School Bus. This series of books aimed at early elementary share quite in depth ideas about diverse topics like habitats, the water cycle, and weather. The thing that I like about these books is the failure & discovery as the class tries to figure out how something works. I like the square ones by Scholastic best — the older ones have red covers (like this one) and the newer reprints look more like this one. The rectangular ones are less story and more conversation boxes and it is busy and hard to read, IMO.

Good read-alouds (no pictures though) include just about anything by Thornton Burgess, the best three being The Burgess Animal Book, The Burgess Bird Book and The Burgess Seashore Book.

We aren’t big TV watchers, but there are several shows available on Netflix that the kids are permitted to watch. They include:

Wild Kratts – a part animated, part live action show where two brothers explore a particular animal and discover it’s unique creature powers. Everyone from age 2 to 8 loves it and even my husband & I like it.

Magic School Bus – long before this was available on Netflix, I purchased the DVD set on Amazon. The DVD set is incomplete, however; more episodes are on Netflix than are in the DVD set. These are pretty much identical to the books.

Octonauts – a cartoon aimed at the younger set, this underwater group helps all manner of sea creatures and along the way they learn about a myriad of creatures and ocean life, currents and more. My 8 year old is sick of it, but that may be due to the 2 & 5 year old requesting Octonaut marathons. We’ve watched all 3 seasons at least 7 times so that could be a factor, too ;).

Dinosaur Train– This is also a cartoon aimed at the younger set. Three pteranodons and a t-Rex ended up together in a nest and the family takes the dinosaur train through “time tunnels” to visit dinosaurs in different time periods. If you are a biblical creationist, they talk about the earth age in millions of years. That doesn’t bother me, so it’s on my approved list.

Outside science classes are fairy easy to come by around here. In the summer, our local nature center has summer camps on a variety of nature related topics. Our co-op offers wonderful science classes and College 4 Kids offers science classes all summer long. You could also check for Junior Ranger programs at nearby State or National Parks.

Just having resources like this available help my children get a practical grasp of most major scientific concepts without a ton of effort on my part. Repeated exposure really helps the information stick and furthermore, since they bring the books to me, they are learning without it feeling like work. Frankly, I think that is the best kind of learning; I think it sticks better :).

Do you have a favorite resource for elementary science exposure?