So.  This year, I decided to go with a box curriculum for both girls which is something I’ve never done.  I mean I’ve ordered one before, but never DONE it.  This year, I plan to buy it and DO it.  I decided to buy everything except math, because we really like CTC (and I have 2 years of it paid for :D) and phonics, because I thought we were past that.  Until I started reading The Core; now I’m not sure what to do since I didn’t BUY the phonics book. 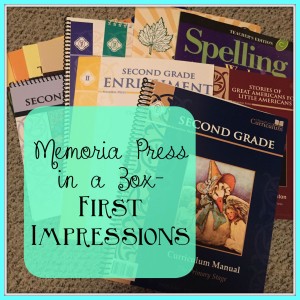 The Second Grade Memoria Press program has the following subjects:

The lesson plans go 5 days a week and I will be trying to condense into 4 because we consider Monday a wasted day. Well, we did last year; I’m still not sure what co-op will look like this fall!

Here is what we are doing (or not) and my initial impressions of them prior to use.

Recitation — not doing.  I purchased Classically Catholic Memory and we will be doing that instead for both girls.

Latin/Grammar – I have Prima Latina; we will be doing it.  I’m hoping that she doesn’t fight too hard.  The subject matter for her this year will be easy on her thinking but her writing, both physically and spelling/gramatically will be her biggest challenge this year.

Reading – I purchased all the reading/literature packs including the teacher’s key except for Prairie School.  It just looked TOO easy.  She should float through this except for the writing/workbooks part. Simple books, simple questions.  I’m not sure if I needed the teacher key, but I bought it anyway.

Copybook/Memory – not doing the bible story assigned (we are reading another with Itty Bitty’s school), but will do the cursive copybook as assigned.

Cursive – she learned cursive last year.  I didn’t buy this.

Literature & Enrichment – We are borrowing from the library or purchasing all of the literature & science books. We will also do the history & culture assignments.  Both girls will share the Kindergarten poetry and art selection studies.  If they had a CD for music, I would do the music selections but they don’t so I’m just going to play a composer each month.  I’ve had those CDs for years.

Phonics – I’m still not sure about this one.  I think we are going to use Essentials again because they go over those phonics rules.  But I think I’m only going to use THAT piece of it.

Spelling – I purchased the Spelling Workout C teacher/student and I’m not sure if I should send it back or not.  I COULD use Essentials for the spelling piece, too.  But I think she would like this workbook, better.  I’m think I’m going to try it.

I could have done without the Second Grade Worksheets, though.  I don’t need the phonics pages since I’m using Essentials instead and the spelling pages are nothing particularly special except that I don’t have to make them myself.  Which has it’s own value :).

In the end, I’m kind of excited to try the box curriculum for second grade from Memoria Press, thought with my all substitutions & one deletions, I’m not sure it counts!  I’m not sure if ALL the teacher/student guides are necessary, but I won’t know that until I’m in the middle of it.

I’ll share more about how our first cycle of school went in October as we ease into things and see how it works with TWO little girls doing “real” school.  This week, we are just starting with Math, Spanish & Bible/Religion.  Next week, we will do EVERYTHING for a week or two & then we have a week off for Labor Day to assess and regroup.

Memoria Press Kindergarten in a Box

The Memoria Press K program only has 5 “subjects” a day.  Where Jr. Kindergarten has 3 days, Kindergarten has 5 days scheduled.  While we are not using everything MP offers for K, we are doing every subject they suggest. There is:

Recitation — eliminating — we are doing CCM instead.

Phonics — substituting.  We use Logic of English.  We tried MP’s Phonics program, but I think Foundations will work better for her, too.

Math — We will be using Numbers part 1 & 2, but not Rod & Staff.  I have a Critical Thinking Co Math Book for K that we will use instead.  Mostly because I have it and didn’t use it with Lil’ Bit.

Copybook/Memory — I am using the Zaner-Blosser cursive app in conjunction with LOE to teach cursive from the start.  She does do a little MS tracing on other things, but it isn’t our primary…

Literature & Enrichment — This we are totally using as it’s shared – minus the music.  This is really the biggest reason we use MP curriculum.  The read-aloud’s, art, crafts, poetry, science, etc were her favorite things last year.  I’m sure they will be again this year, too.

I will just pick a monthly composer instead of finding and playing a single track every week, though. If they offered them all on a CD, well, that might help. But they don’t :). 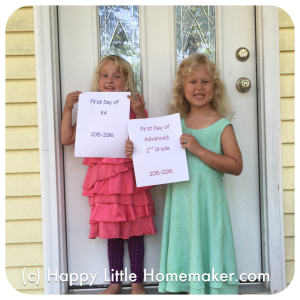 It was hard to find a pic without a diapered butt in it. The little man kept photo-bombing the pictures and it was SO hot, he was in a diaper & nothing else. Ha!

What are you doing for school this year?