As a homeschool mom I have LOVED filling in the gaps of my own education while teaching my children. But I wanted more. I wanted to know more and so I decided to renew my interest in my OWN learning and education. I want to know it all and study it all. Right. Now. Thankyouverymuch. So many books, so little time.

Science is an area that, while interesting, it was never interesting enough to compete with religion or history or literature for me. That is, until Laura at the Midwest Theological Forum sent me a copy of their book Faith, Science & Reason: Theology on the Cutting Edge. These are the same folks who created my favorite bible and the Didache series. They hit the ball out of the park with this one.  Written by Christopher T Baglow, Faith, Science & Reason is intended as a high school level textbook. If you spend a lot of time in protestant circles with people who believe in Biblical Creationism (i.e. Genesis is accurate exactly as written), but aren’t quite buying into it (or aren’t at all), THIS is the book for you. Honestly, I would recommend it to any homeschooling parent, especially those who are on the fence about Biblical Creationism or those who (like me, I confess), find it implausible at best or absurd at worst. 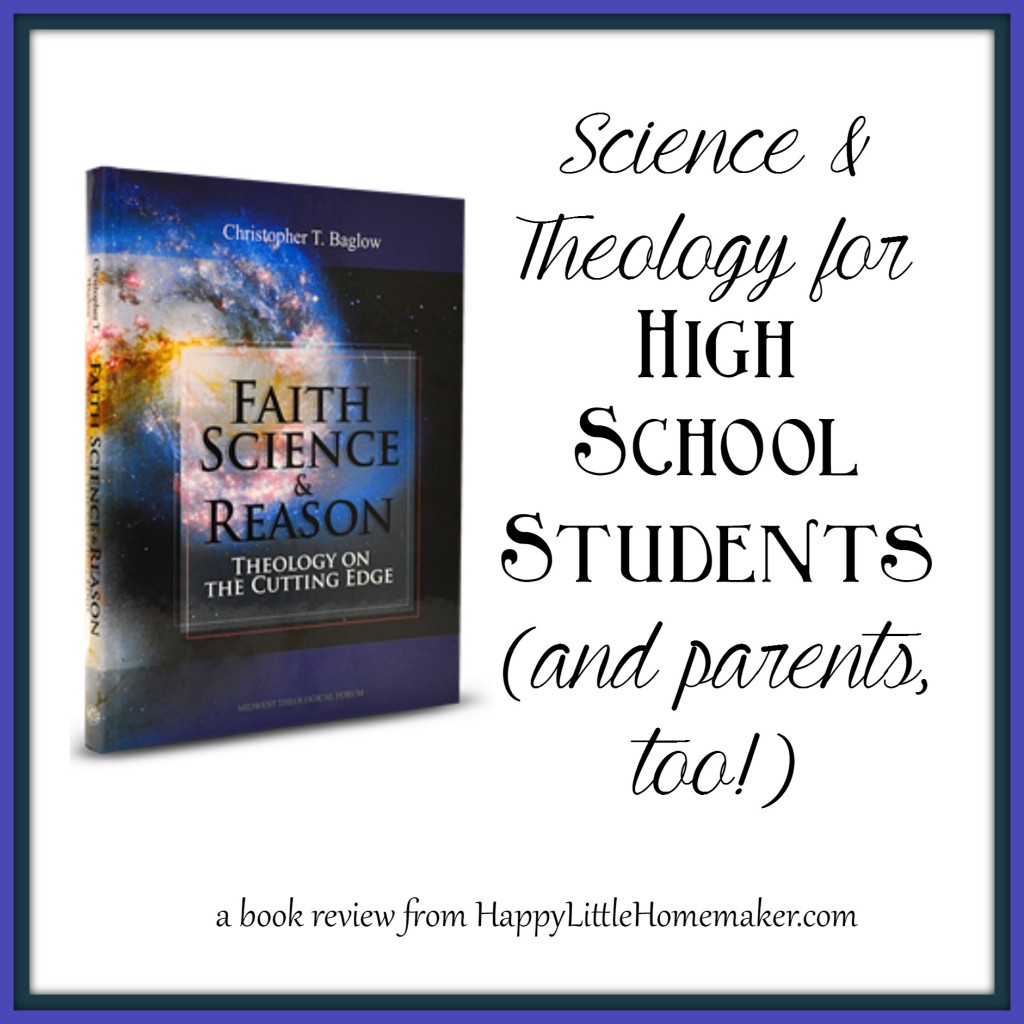 Mr. Baglow does a masterful job making connections between scientific discoveries and widely accepted theories and sound theology. While he does frequently quote Catholic Popes and papal documents, he also quotes many theological greats like St. Augustine and  St. Thomas Aquinas, who are unarguably some of the greatest thinkers who ever lived. He draws the reader through many gray areas that cause people to think that certain concepts are incompatible with Christianity. For instance, he goes into great detail on evolution and how it is NOT at odds with theology at it’s core. He shares, however, how evolutionism (which is different that evolution) suffers from personal prejudice, faulty logic, and the reductionist and materialist ideas that have come from it. There are also several pieces of evolution that he discusses in great depth, including the the how and why of human evolution. I will share, as a spoiler, if you will, that he does present an argument explaining how the evolution of humans might be theologically possible, including Adam & Eve and the infusing of a soul. Whether you believe it is possible, Faith, Science & Reason is a fascinating read!!

In addition to addressing the very controversial subject of evolution (which indeed, covers quite a bit of the book), Mr. Bagley spends several chapters in Faith, Science & Reason examining science and faith and weaving the two together; the how and why they should be. And for those who are constantly hearing the myth that the Catholic Church is anti-science (usually citing incorrect knowledge of the Galileo affair), he also goes into great depth as to how the Church is one of science’s biggest supporters and always has been. If you never read the book, let me just quote this one passage:

…there can never be a real conflict between faith and reason, since the same God ho reveals mysteries and infuses faith has bestowed the light of reason on the human mind, and God cannot deny himself, nor can truth ever contradict truth.

–Dei Filius (from the first Vatican council in 1870)

Now the Catholic Church does not make proclaimations about what science is true or not. Only it’s teaching on faith & morals is infallible. But popes can (and have) made speculations on why a theory or discovery may or may not be compatible with faith. In addition to sharing the history of how modern science began (with Catholicism and the belief in one God and non-reliance on ancient polytheistic mythology), you learn about the Church’s hand in science as well as the myriad of discoveries made my Catholic priests and religious. Indeed, Catholic men throughout time have discovered entire branches of the sciences including acoustics, hydraulics, stratigraphy, paleontology, crystallography, genetics and even BIG BANG Cosmology! Who knew?

Faith, Science & Reason is 11 chapters long and includes supplemental reading (usually additional theological reading) as well as vocabulary terms to define, study questions and sometime even practical exercises. It’s a hardcover book with glossy pages, and attractive photos and key points in the margins and well worth it’s purchase price.

As far as readability goes, I think that it’s probably written around the average 8th grade level like most writing found in America. I found this book VERY easy to understand and I find my brain gets taxed much more easily after having three kids :D. Since I don’t HAVE a high school student, I can’t really share any pacing tips. I can tell you that each of the 11 chapters is divided into about 6 sections (give or take) and there is also a concluding chapter. Also, I don’t think there is a test bank or anything, but I think this is really best suited for discussion anyway. I loved this book so much that I tried to discuss it with my husband just about every time I read something interesting (which was every time I opened it up) even though he hadn’t read it.

Quantum physics + theology all wrapped up into one. I can’t even tell you how much I’m loving Faith, Science & Reason!!! #keepingcompanycm #catholic #science #momschool #reviewcomingsoon

Not only did this text clear up myths surrounding the Catholic Church and it’s relationship to science, it also addressed various types of “science,” or more accurately, science turned theology, that are incompatible with Christianity. Reading about the scientific discoveries made by Catholic priests in the widespread disciplines of science, especially cosmology,  metaphyics, & calculus, made me hunger to know more. I could have cared less about higher math, before reading Faith, Science & Reason to be honest. Mr. Bagley is obviously passionate about the subject of science and had kindled an interest in me that had not been there before.

And if he can kindle an interest in science or math in your student? Well, is that not the best thing there is for learning? Needless to say, if you are interested in science and/or education and are Christian, I highly recommend reading Faith, Science & Reason. If you are a Charlotte Mason style homeschooler, this is a lovely selection for high school science. While it’s not a living book in the sense of say, a child’s Thornton Burgess book, it IS a book that will engage the heart. It tells the story of the Christianity, god’s relationship with man and the beauty and order of God’s creation. It is beautifully told and interesting to boot. I cannot wait to share this book with my daughter when she is old enough to read it. Even if we are not homeschooling during high school, this will be required reading no matter what. It’s THAT good.

Do you have a favorite science textbook for yourself or for high school? What is it and why?