So, if you are new here, we turn International Talk Like a Pirate Day into a whole WEEK of fun & frivolity. Everyone got new pirate costumes this year due to having worn them all out or outgrowing them. Even I have one, though I no longer know if it fits :). 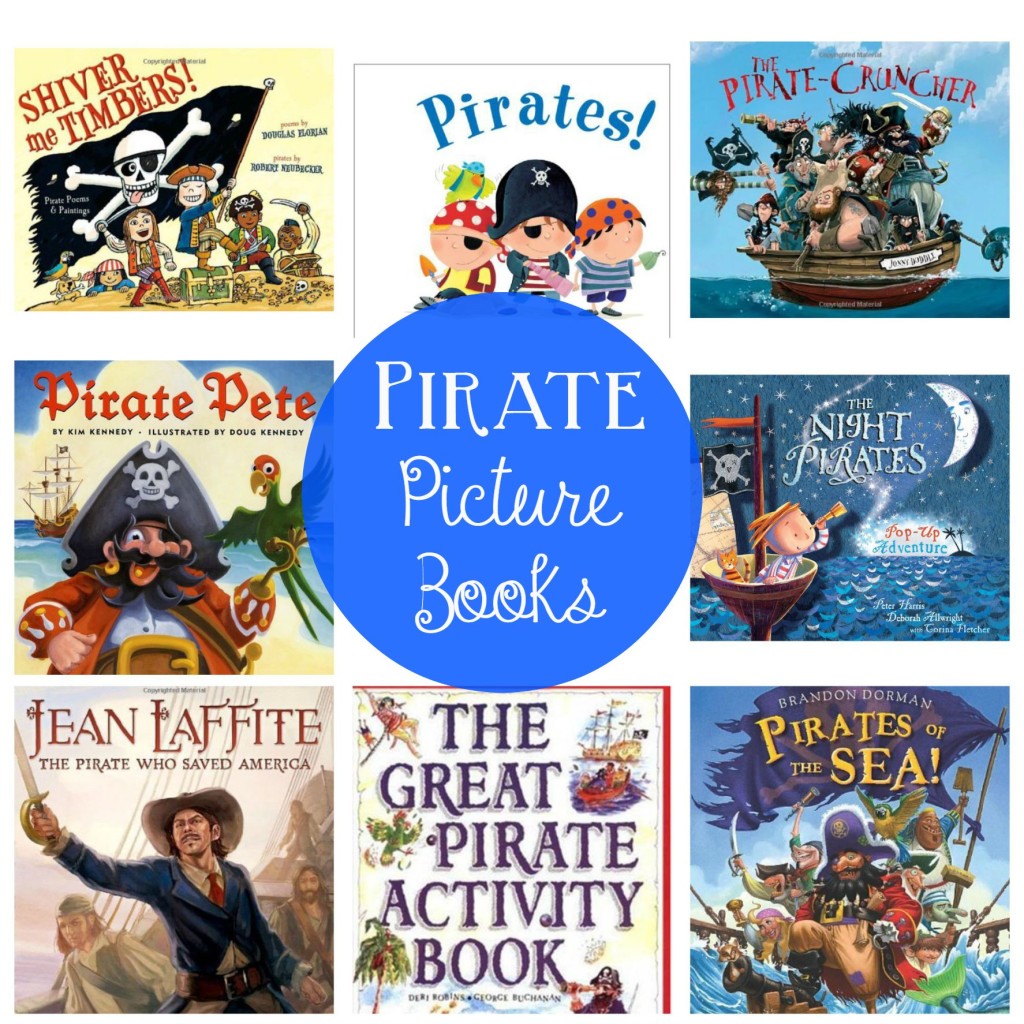 Our favorite way to celebrate any holiday is to get a book (or 8). I am sick of buying crummy books though, so I borrowed a bunch for the library and found a bunch worth buying! 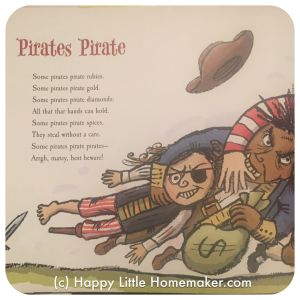 My very favorite is Shiver Me Timbers!, a book of pirate poems and paintings. The poems are piratey and fun and the illustrations are cute. I’m thinking a pirate poetry tea time is in store for this week! 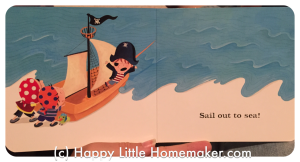 We also found this super simple but cute board book — Pirates! Each page has a very simple illustration and pirate phrase. It’s super cute for a 1-2 year old. Honestly, I wish I had it last year! 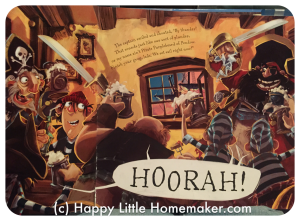 The Pirate Cruncher was another favorite. This was a simple story about pirates out for treasure hunt gone wrong. So full of greed that they totally ignored all the warnings and the ending was so clever I couldn’t believe it. 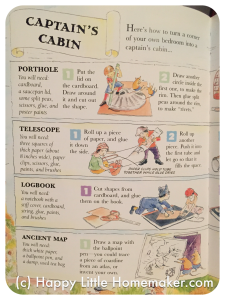 The Great Pirate Activity Book is a great pirate book for your crafty kiddo. A mix of pirate knowledge with hands-on projects using stuff you have is great for your 7-10 year old. It has how to make pirate clothes, a board game, party ideas and more. My daughter wants to do it ALL and started pestering me about a party two weeks ago. Yes, Talk Like a Pirate Day has a lot of anticipation in these here parts. 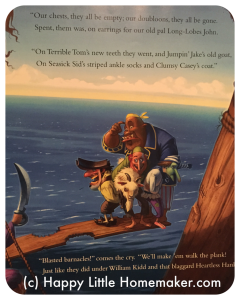 Another great pirate book we discovered was called Pirates of the Sea. This is super similar in look to The Pirate Cruncher, but the story is told in (very well done rhyme). The pirates are broke and go off in search of treasure. There are a few funny/silly parts and they battle only ocean creatures, no people. Another very cute story on the list for next year. My budget is not unlimited :). 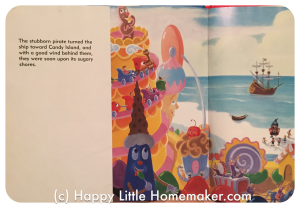 Pirate Pete is the story of a stubborn pirate who steals a treasure map from a queen and gets totally sidetracked all along the way. In the end, the queen gets the booty and he’s rowing across the ocean in search of the next adventure. I think this is the first of several Pete Adventures by Kim Kennedy. 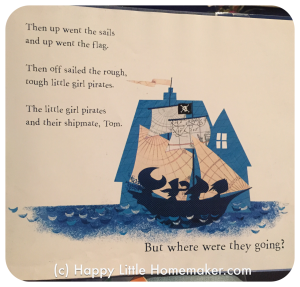 The Night Pirates was not my favorite of the new pirate books, only because I found so many good ones this year! My younger daughter likes this one, probably because the pirates are girls. It has a bit of a Give a Mouse A Cookie feel in that the beginning & end are similar.

The night pirates com in the night to steal the front of Tom’s house to use as a disguise when going to get some treasure. He asks to join the girls and they go off on a pirate adventure. It’s cute & clever and great for girls or children with shorter attention spans. And the end made me laugh out loud. 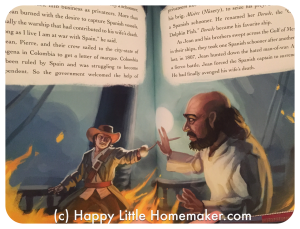 Finally, I bought a picture book for my oldest daughter about the real story of Jean Laffite: The Pirate Who Saved America. Jean Lafitte was a Jewish pirate who reminds me of the Dread Pirate Roberts and Inigo Montoya. He was an upstanding young man who was privateer for France. He was in the pirate business for many years and when the British tried to capture New Orleans, Lafitte & his band of pirates helped the U.S. defeat Britian. Very good story about US history. Frankly, it was just a great story, period. I’m really glad I bought this one!

You can find our other favorite pirate picture books at these posts:

If you are looking for other pirate ideas, check out all our past pirate day posts to springboard your plans for this week.