Winter can get so boring north of the 45th parallel. Last week school was canceled more than once due to windchills of -20! We’ve been mostly stuck indoors for 4 months now with no end in sight. When that happens, it’s nice to have interesting things to listen to while playing. Our latest was a fabulous addition to our history studies, In Freedom’s Cause. This audio drama was created by Heirloom Audio Productions, based on the classic novel by G.A. Henty. 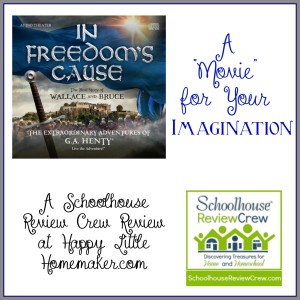 Heirloom Audio Productions produces quality modern audio dramas reminiscent of old school radio programs but with the quality acting and audio you would expect from a modern creation. They produce adventure dramas based on the historical novels of G.A. Henty. Last year, they released Under Drakes Flag and this year I was lucky to receive a copy of In Freedom’s Cause, the story of Sir William Wallace and the fight for Scotland’s freedom. For the purposes of this review, our family received the In Freedom’s Cause Single Package consisting of the Physical CD, a digital study guide, an MP3 download of the soundtrack and a PDF of the prayer of William Wallace.   They were also super generous and gave us some additional items included in the 4pack.

How We Used In Freedoms Cause

Our first run through of In Freedom’s Cause, was an audio adventure while we were cleaning or playing during lazy winter afternoons and weekends. The audio drama is approximately 2.5 hours long and we listened to it for about 20-30 minutes at a stretch and talked about what we heard and explained the confusing parts. It’s a rather grown up story for my 7 year old who is a bit more visual and so there was a lot to explain, but she really enjoyed it, as did my husband & I. My 4 year old has a tendency to be quickly irritated by loud or intense things, but she did a good job with In Freedoms Cause.

Being a war/adventure story, it was really fun to listen to when dad was home to offer his explanation and viewpoint of the Scots fight for freedom. We also listened to the soundtrack occasionally. The digital study guide was broken out by track (37 of them). Even though there were things she didn’t quite understand, my oldest (7) did still get a lot from it though.  We have been reading Fifty Famous Stories Retold and right in the middle of listening to the CD’s, we read the stories of Sir William Wallace & Robert the Bruce. She recognized it instantly. We are on our second listen through :).

If you really wanted to go deep and use this for in-depth history studies, you can listen to each track (about 3-5 minutes) and then pause it to use the discussion questions. In addition, each section includes critical thinking questions for older students as well as vocabulary words. The books themselves are also available very inexpensively for the Kindle if you wanted to include that in a full study of the topic. The intended age for In Freedom’s Cause is ages 6 and up.

They are releasing two new productions in 2015, the first of which will be With Lee in Virginia.

Overall, we really liked In Freedom’s Cause. As a mom who is not fond of (any) preparation, this audio drama was a great addition to our studies. Since I am mostly concentrating on exposure & familiarity at this stage, I’m not worried about her absorbing every detail. When she is in the Logic stage, I plan on listening again as a supplement to European history and using the study guide for her to get more of the details and think a little more about it.

My older daughter enjoyed having another audio story to listen to. She had to adjust to understanding the accent because the actors did such a fabulous job. She is very people-centric and listening to stories about people was right up her alley. She asked for it several times, which is high praise, indeed!

Read more about what other crew members thought of In Freedom’s Cause.