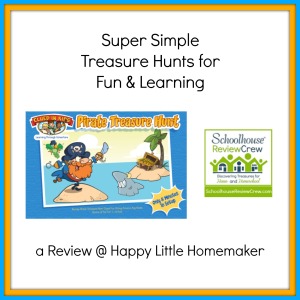 For the first day of school, we had a treasure hunt for our new school supplies. They LOVED it! And now that my oldest is getting to the point where she is finally old enough to do a scavenger hunt on her own, she does every one she comes across. So when I had the opportunity to review some treasure hunts from Clued in Kids, I pretty much begged to be a part of it.

Clued in Kids publishes treasure hunts for kids for preschoolers through early elementary school (about 4-7). The treasure hunts are designed to teach as well as entertain and cover areas such as logic, problem solving, and even math, language arts & history, depending on the set. The sets are available in print or digital and retail for $8.99 and $5.99 each respectively. For purposes of the review, I received the physical Pirate Clue Pad and printable Thanksgiving Treasure Hunt. 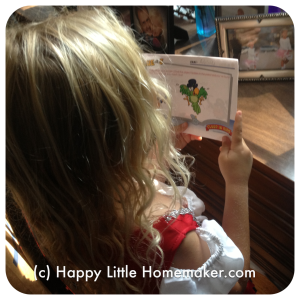 These treasure hunts from Clued In Kids were a lot of fun. From a lazy mom standpoint, they were crazy simple to set up. It took about 10 minutes for the printable one & 5 minutes for the physical one. I love that the bottom of each clue tells you where to hide it and you can even assign clues to people. I assigned mine based on ability to solve the problem. There is also a “key” sheet that tells you the final answers so you can give hints or help as necessary.

Since these are treasure hunts, you need to have some sort of treasure to hide at the end, but you don’t have to go nuts with it. Both times I packed a lunch bag with their snack. They are forever asking for the special snacks I keep for co-op or trips that I don’t let them eat at home. Nothing major, but for some reason a tiny fruit cup and small bottle of water are way cooler than a bowl of peaches from a can and a glass of water. Who knew, right? My kids would be just as happy to find a sparkly sheet of stickers as they would a new book. It’s not worth stressing over.

The Clued In Kids folks did a good job of using super common places to hide the clues. The instructions suggest holding onto a clue that you don’t have in your home. I never had to do that. They were super easy–things like bath, forks, socks, milk and more. There was only one outdoor clue (bike for both) which makes them work well even for winter use.

Both of the treasure hunts I received had the treasure placed in the dryer. Which is a great idea — except on laundry day. And if you have several and the kids skip to the end. I could totally see my 4 year old doing that in a few years. 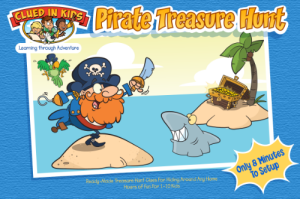 I was soooo tickled that we received the Pirate Clue Pad before Talk Like A Pirate Day. It was perfect end to Pirate Week. Since we do Pirates in a big way around our house, I was really glad that the clues were not hard.

My 6 year old had no problems except for the first time she ran into a clue that you had to hold up to a mirror to read. There were a good number of clues that my older 3 year old could have done if they were read to her. And, you know, if I had let her :). Because the clues were so simple, my 6 year old had it solved in almost the same amount of time as it took to set up! 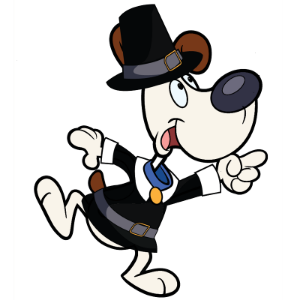 The Thanksgiving Treasure Hunt was set up the same way as the first but is intended for a much broader range of people…like everyone at Thanksgiving dinner, right? Their site lists ages 4-104, but aside from the action clue, there isn’t much for the 4 year old. I think I only had 3 assigned to her–a find the out of place item type clue, an action clue, and a simple addition that I walked her through the answers, while big sister decoded the clue.

It was much trickier than the Pirate one and without the key, it would have taken a LOT longer to do. I would guess that a 7 or 8 year old would find it easier, but still a little tough.  An accompanying storybook or a resource to find answers would have been nice.   I led her through answering the questions, but didn’t make her spell or write all the words. Once she gave the right answer, I told her which letter was needed. Even so, it took about 35 minutes, which was substantially longer than the Pirate treasure hunt.

I also liked that you learned a bit about the history of Thanksgiving as you went through it. The Pirate one was more about entertainment. Not all clues were educational. I loved the joke clue card best. Here’s an example.

Q. What sound does a turkey’s phone make?
A. Wing wing!

We love funny jokes around here. And the worse they are, the more we like them! This one would be awesome for a mixed age large gathering. Since its a printable, you could even divide into teams and the first one to the treasure gets it :).

I liked that the Pirate one was easy, but wow was it quick. I don’t think you can make it take more time & still be easy, though. For the printed ones, the paper quality & illustrations were nice, but I would have rather them been coated to use with dry erase markers so you could reuse them. I saved mine to use again next year, but it won’t be as much fun with some puzzles half solved. This is easily solved with the digital ones which can be used year after year.

Its a great idea and the have hunts focused on school (multiplication, homework, etc), holidays, interests & more. I will probably get Halloween next year since I never do anything special for that holiday; I’m usually too busy getting ready for my daughters birthday which is a week before. These treasure hunts are super quick & easy and my daughters really get excited about them (even the little ones)!

Interested in seeing more? Check out what other members of the crew tested and how they liked them!