*** This article originally appeared in the Fall 2012 issue of Traverse Bay Family Magazine.  It is reprinted with permission.  *** 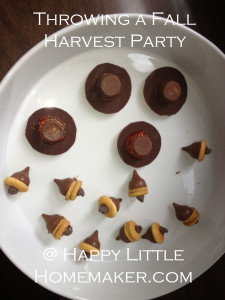 I love to be able to take advantage to all that our area has to offer in the fall. Sometimes, though, it’s just too much with travel time and naps, not to mention money. Plus, there usually isn’t much for a toddler to do. I’ve spent many an hour in the van with a sleeping, nursing baby while my older daughter and daddy went out and had fun.
One of the things that we’ve done to accommodate the needs of a toddler is to throw a fall harvest party. The greatest part of having your own party is that you can keep the budget under control and tailor the activities to the age of the kids. It can be as elaborate or as simple as you like! I tend to be on the side of elaborate so I’ve done a bit of the work for you.

I love printable items! Last year we had an apple themed fall harvest party and so I made a Happy Harvest banner.  I purchased fall themed party gear pretty cheap at Oriental Trading. Not only did it include paper plates, cups and napkins, but it included balloons, confetti and streamers. Party-in-a-box = easy party!

There are several ways to keep the food within budget. You could also have a potluck—last year, I had everyone bring a lasagna and I provided salad, garlic bread, drinks & dessert. You could also have a toddler/baby play date and have everyone bring a fall snack – think apple slices, pumpkin muffins, homemade applesauce, and even apple cider. Communicate well and be prepared to be a gracious host – pad your budget to include more food than you anticipate just in case of any misunderstandings.

Little kids love to knock things down so I made a tower of cans to knock down with bean bags. I also planned to put labels similar to the cans on some two liter bottles for DIY bowling. Apples or pumpkins make great bowling balls. If you are including older kids, you could find various craft kits on Oriental Trading.

If you plan it right, you can leave the decorations up all fall. Wouldn’t it be nice to have the house ready for Thanksgiving ahead of time? And if your friends aren’t the Halloween celebrating sort, this is a great chance to get together with them and have fun.
Do you like to entertain?