When I worked outside the home, all I wanted to do was go home and not. Talk. To. Anyone.  Now that I’m home 90% of the time, all I want to do is talk to another adult!  One way that I keep my sanity is to throw parties. 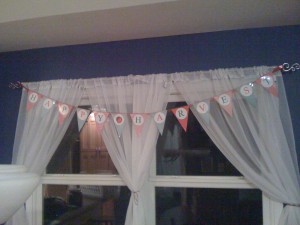 Last week I planned an apple harvest party. Considering that most of our friends have at least 4 kids, I had to find some things for them to do! 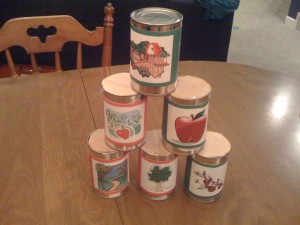 I made a can pyramid carnival game out of old cans.  I found the safest cans to use are the pull tab cans. First, I removed the labels.  Then I traced the opening to make a lid for the opening so the smaller kids did not cut themselves. I taped them on with packing tape, then used tape to secure the covers I made.  You can find the can covers on Scribd. 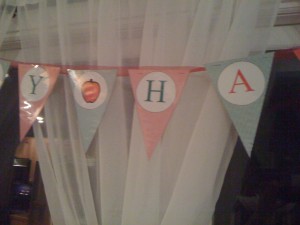 I also made a green, red & white pennant banner that reads Happy Harvest.  I laminated it and stapled the pieces to some organza ribbon.

I had planned on creating some 2L bottle covers for bowling pins & an apple shaped beanbag game but knew I would have a low turnout so I didn’t worry about finishing them :).

Have you ever had a harvest party?  What games did you have for the kids?