I’ve tossed around putting my children in piano lessons for a long time. I used to play a musical instrument, but everywhere I go people say to wait until 7 before enrolling them in things — piano, dance, etc. The opportunity to review Easy Piano Basics from JazzEdge came at just the right time — she is 7-1/2 and was eager to try learning to play the piano. Plus, school was winding down so we had some extra time to do it without it getting crazy. 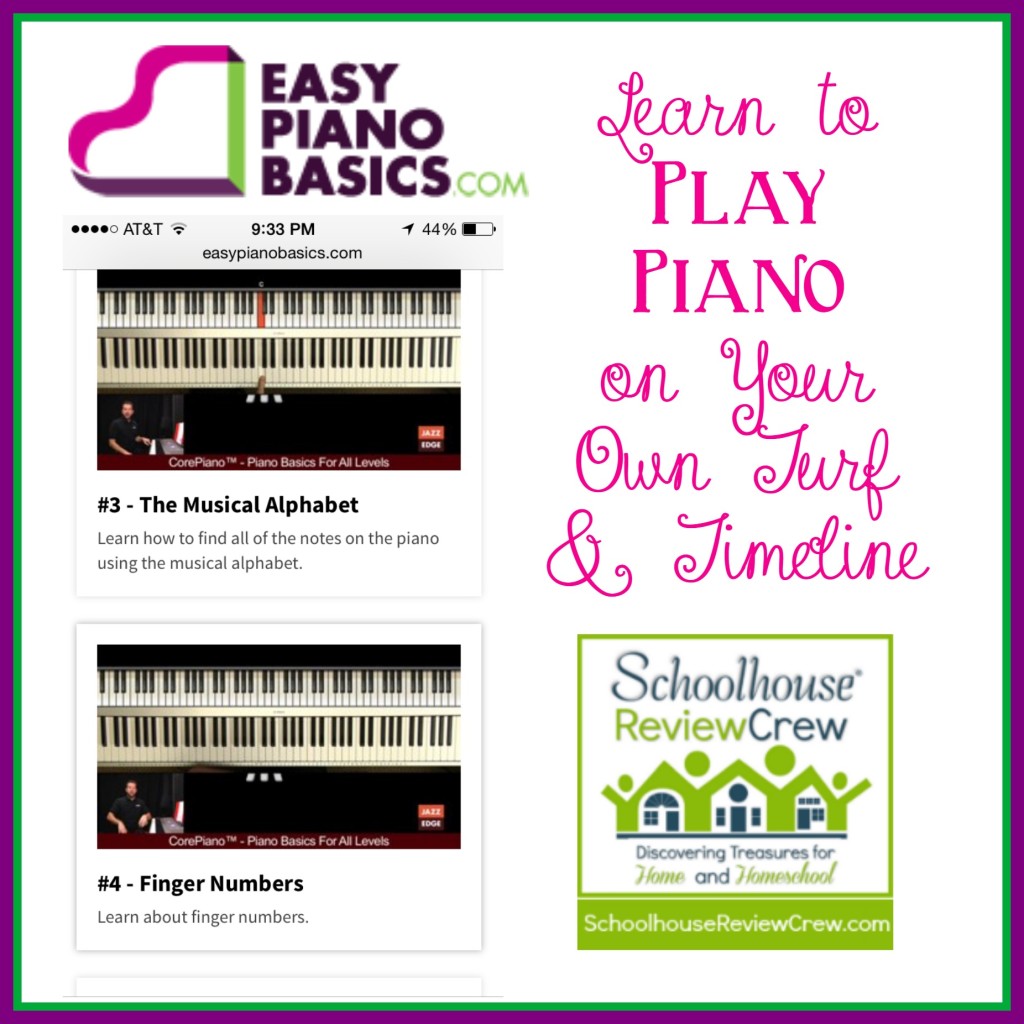 JazzEdge is a company that provides online music instruction via pre-recorded videos.  The crew was able to review one of these three offerings — DrumsWithWillie, PianoWithWillie, and Easy Piano Basics.  The first two programs are paid for a particular period of time while the Easy Piano Basics is a lifetime membership.

Easy Piano Basics consists of 32 streaming video lessons that range from 2-10 minutes in length, with most being somewhere in the middle. You CAN download the lessons in Easy Piano Basics, so if you don’t have regular high-speed internet access but can go somewhere and download them all, you should be able to use it. Each lesson includes a time to watch, a summary of the information contained within it, downloadable “sheet music” (I use quotes because they typically have less than a measure of music on them.), and what to practice that week/lesson during your practice time. 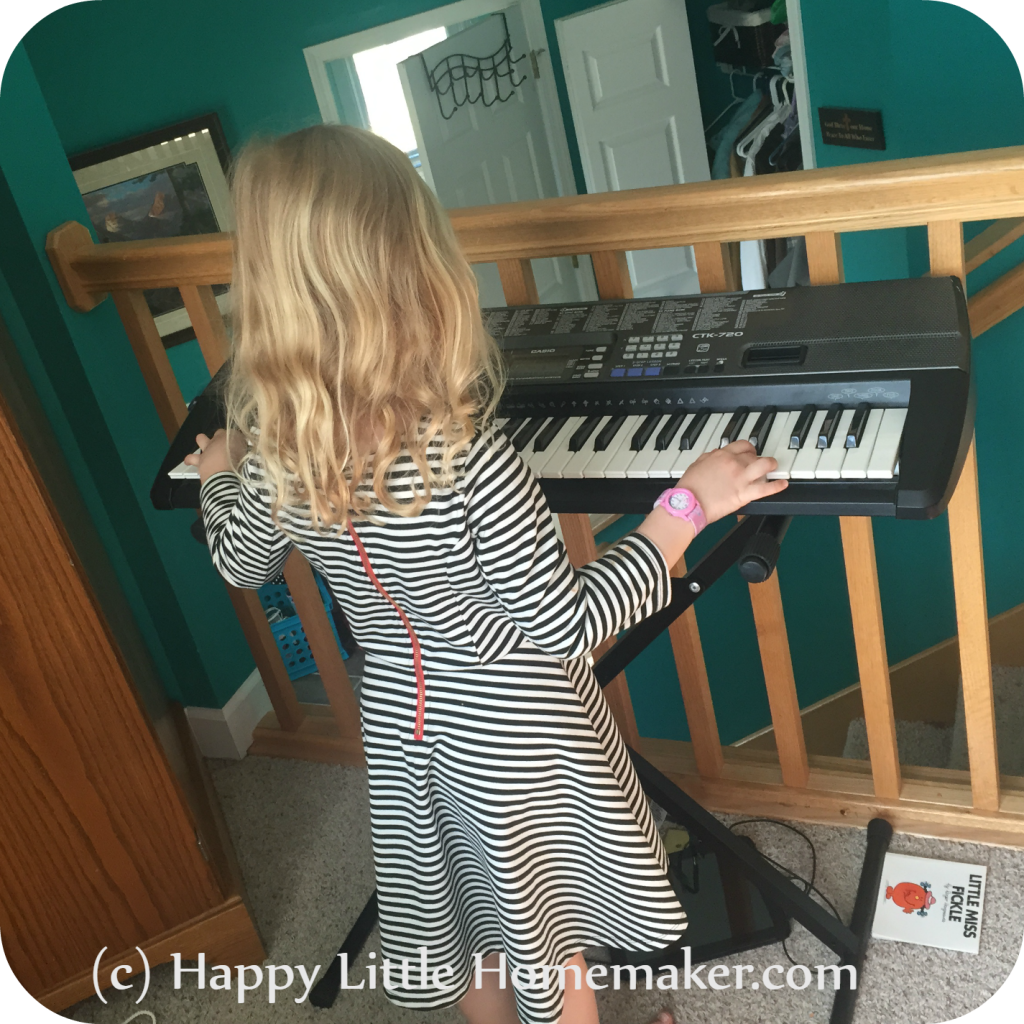 You can use any keyboard or piano (though a 61-key is recommended at a minimum) and can use almost any device imaginable. I used my iPhone 6. My daughter used our ancient HP tablet that has a proprietary OS with a chrome or safari web browser. I have also watched it on the computer. In addition, we have both watched videos both while sitting at the computer and in other places — couch, dinner table, outside, etc.

How We Used Easy Piano Basics

It’s funny. I recently listened to a talk from our state homeschool conference/convention and he was talking about how most of his job as a violin teacher was motivating the parent to motivate the student to practice every single day. That was seriously the most difficult thing about using computer-based music lessons; there was no teacher keeping her accountable. 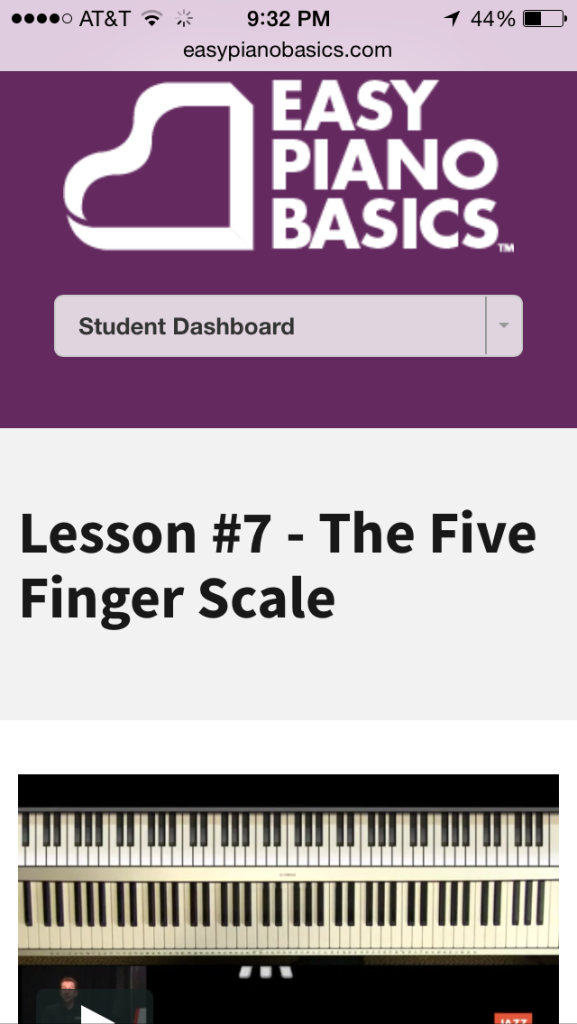 For a 7-1/2 year old with no music experience

I requested this program for my 7-1/2 year old and myself because she begged to try it. She was extremely excited when it arrived and watched about 5 lessons in the first day. You know, before I noticed what she was doing :). She was not as enthusiastic to work on it slowly each day, practicing the items as directed to master the material. I honestly think she thought that she could watch the videos and somehow just be able to play piano. Obviously, none of these were the fault of the instructor. I mention them, however, because I didn’t really consider them when I requested it on her behalf.

We used this program 3 days a week (on average). While she probably could have done a lesson each day and practiced the old material on the days where the practice material was light (like find G & C on the keyboard), I opted to have her practice that particular lesson until I thought she had a fairly good grasp of it.  Maybe an extra day or two at the most. She could watch the video again if desired, but I didn’t make her. 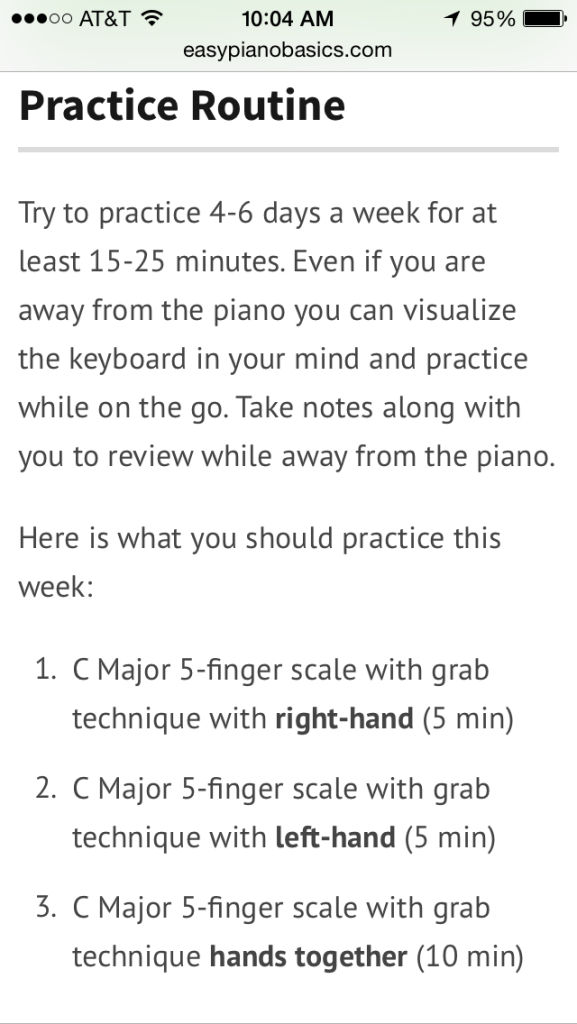 For an adult with prior (non-piano) music experience

I also used these online piano lessons myself. I have some musical experience. I played french horn for 3 years in junior high and I taught myself to play the keyboard — we always had one around the house because my mother enjoyed it. I very loosely use the term play, though, because I could only play one-handed. I never got the hang of using my left hand.  I can read music and sing or play it if I know the tune — I am a lousy sight-reader.

But all that was 20 years ago. I had forgotten where the notes on the keyboard were (I used to know) and could barely remember how to read music. Reading it and connecting the note with what your hands should do on an instrument is a different beast than reading it and hitting the proper note with your voice. 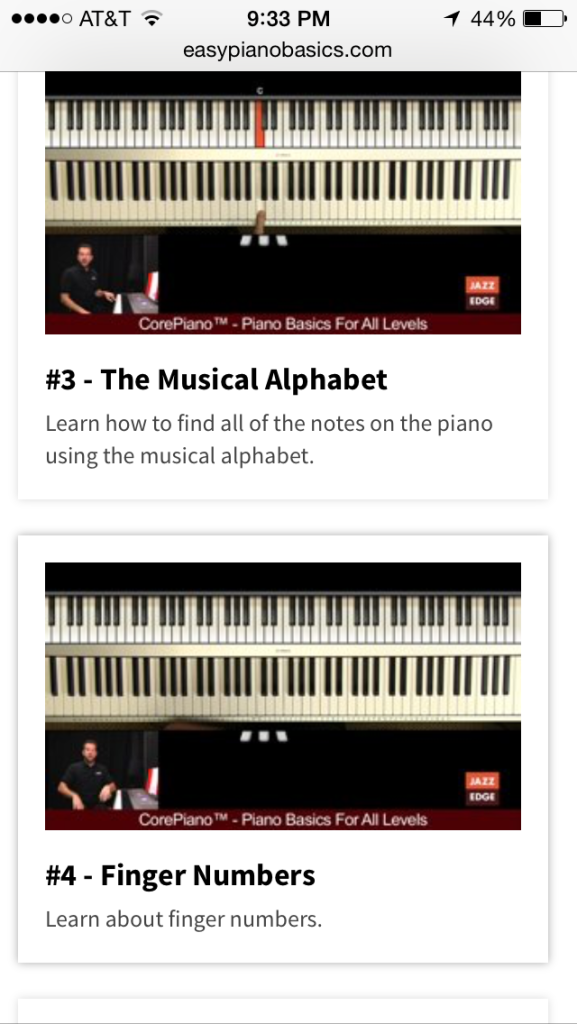 And, piano is a whole different beast than a french horn. I had no idea how much I didn’t know until I started watching the EasyPianoBasics videos. If you have taken a band class, you probably learned the Every Good Boy Deserves Fudge/FACE method for reading music on the staff. Did you know that it doesn’t work that way for anything except the Treble Clef staff? I had no idea! And I also was unfamiliar with the treble clef being called the G clef.

I have to say that I’m really glad that I had a 20 year gap because I had forgotten so much that all my poor habits were no longer habits at all. I could still only play the first song I ever learned — How Dry I Am. Thanks Bushia for teaching me a bar song at age 5 :).

Since I had previous experience I watched the videos at a bit quicker pace, sometimes watching two per day. Because some videos didn’t have much hands-on practice assigned and had things like find skips or half-steps in music you might have around the house, I would work on areas I was having trouble with. For me that mostly meant coordinating both hands to work together, although perhaps typing has created some ambidextrous abilities where I didn’t previously have them.

Overall, I think these beginning piano lessons are a really great tool for learning the basics. I love that I can use any device to view them and actually like them best on a mobile device than on a regular computer. The videos are well done. 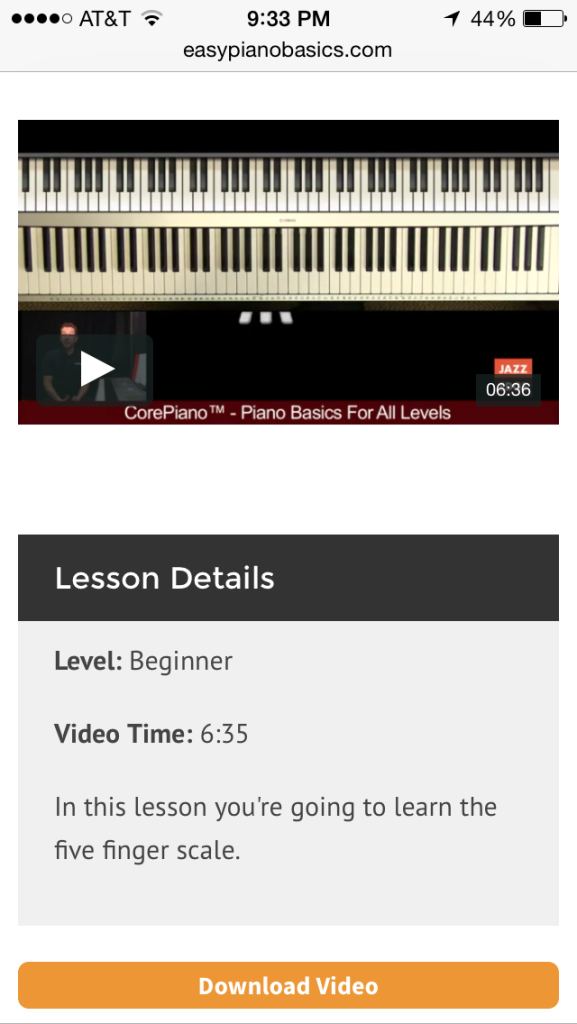 As an adult, I feel they are a little repetitive, but for a first exposure to music, they are probably fine. I do wish he spent a little less time mentioning things that we aren’t learning right now. I think every single lesson he mentions something that you will get to eventually and he says something like “…but don’t worry about that right now. We will get to that later. For now, just remember…” He says it so often that it’s said almost the same way in every video I’ve noticed it in :).

I like the short length of the videos and I love the practice suggestions. Usually each video has 3 items he wants you to work on as well as a suggested length of time. This was SO helpful for my daughter and myself. I would have liked a little more guidance in the practice for my daughter because it is pretty boring in the beginning.  It doesn’t feel like you are actually accomplishing anything and for a kid, it can be pretty frustrating.

A game to go with the find the key and finger lesson. Or a few ideas to go with finding the keys that play a nice tune or rhythm when you get quicker at it. Because I have a bit of exposure to music I helped her find a few less boring ways to practice within his instructions but my knowledge is pretty limited; I’ve already exhausted my supply :). I had my 4-3/4 year old sit in on lessons with us, but it was just too adult to hold her attention. She was interested in the topic and will sit down at the keyboard before or after us and plunk away, but the lessons just aren’t able to hold her attention.

I think these lessons would really be great for a child who is older (or an adult) and actually has a desire to learn. If you have a kid who is begging incessantly, this would be great for trying it out to see if they would REALLY enjoy it before paying for expensive lessons. If they like it, you can easily transition to PianoWithWillie. If they don’t like it, you haven’t invested a ton AND you can use it for another child or yourself or even that child again at a later time.  It’s always available.  It’s also a great option if you are on a monetary or time-budget and just don’t have the resources for one. more. thing.

I, personally, have really enjoyed the progress I’ve made in being able to play with two hands and I will continue until I get through all the lessons. Playing the piano properly is something I’ve always wanted to learn to do and this format is perfect for being able to watch a video while the kids are occupied and sneak in 5-10 minutes of practice in here or there as I find the time. Plus, exposing children to music and how hard you need to work to sound half way decent…well, neither is a bad thing :).

Click here to find out what other members of the crew thought about the JazzEdge online music lessons for piano & drums!