How are you doing in your Lenten goals? Have you been able to spend some extra time in prayer or scripture? What about other spiritual learning? Have you considered replacing some of your media/tv time with spiritual subjects? 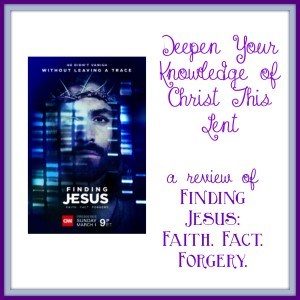 CNN has created a new 6 part series–Finding Jesus: Faith. Fact. Forgery. The series will air beginning Sunday, March 1 at 9pm ET/PT and will investigate the value & authenticity of various relics as well as explore the relationships and events during the life of Christ. Among the relics covered will be the Shroud of Turin, the gospels of Judas & Mary Magdalene, relics of the cross, and others. Among the experts providing insight & commentary are James Martin SJ (author of Jesus: A Pilgramage) and David Gibson, a filmmaker who specializes in following the Catholic Church.

I was able to preview the first episode on the Shroud of Turin last weekend. Each episode is an hour in length. I had originally intended to watch it with my kids but it was a little intense, which explains why it isn’t on in prime time :). I was a little wary of the series due to the fact it was on a mainstream station, but I was pleasantly surprised at the tone. They did a great job at showing the artifact with the story of Jesus. I thought they did a masterful job at presenting the argument that the Shroud was not authentic, followed by other people who have reason to believe that other results may be inaccurate. It ended by stating that they are valuable pieces that will continue to be studied as more scientific research methods are developed.

Not only was the tone of the video friendly to Catholics, but it was friendly to all Christians. There was respect for the people who believe in Jesus and these relics and religious items. I liked that there were viewpoints from people on both sides of the authenticity issue as well as from Catholicism & Protestant denominations.

If you are looking to convert some of your screen time to a more faith-oriented, Finding Jesus would be a good place to start. Knowing about more of these relics and items related to Jesus can help you deepen your faith journey and even help with apologetics.

Due to some of the topics (the gospels of Mary M. & Judas and the brother of Jesus), I might stick with high school aged students or older middle school students who are excellent critical thinkers. I’ve noticed that my younger kiddos take everything they read or hear as truth & gospel ;). They simply don’t have they base of knowledge to draw from yet. Overall, though, I really recommend checking it out as part of your Lenten learning.