Unfortunately, I have to say that online I have a tendency to look pretty negative. It tends to be my outlet for help since I don’t have any nearby that I can call to ask or vent :). That being said, we were so very blessed last year and so when the topic for this week’s blog hop was 2013 In Review, I decided to make it about our blessings.

We got the flu and were out for a month (well, *I* was). But we were blessed to have gotten the achy, fever flu and not a stomach, bathroom flu. And we’ve been pretty darn healthy otherwise! Luckily we also had a carbon monoxide detector installed that was working–it went off while we were all sick with the flu. I was back on top of things just in time for Lil’ Bit’s 5th birthday & we took the girls to Great Wolf Lodge.

I got to go to Suds N Snow with Bones all by myself–no kids! The tile work was done on the fireplace & tub (cash only!). I also finished a rug that’d been working on for a decade. No joke. A decade. 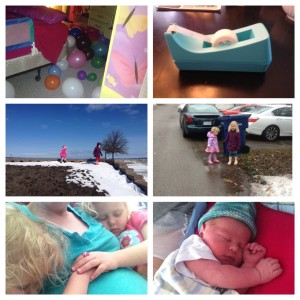 We missed Easter at my parents because Bones had a conference to go to and was getting over a cold, I think. They mailed over the Easter basket and girls loved it! I think it was pretty nice, weather-wise.

I was totally inspired and caught up on everything in May. I had the whole summer’s worth of posts written for both our business, my blog and my guest posts. I love that I have the freedom as a business owner to work a little bit and also have a job such that I was able to take the whole summer off.

The weather was fan-freaking-tastic! And after a fun-filled day, at 9pm, while still 90 degrees out, Little Man was born, happy, healthy and 8-1/2 lbs! We also started building our garage the very next day, which we are adoring now that we have over a foot of snow. Did I mention we paid cash?

I was fortunate to know that recovery was going to be rough due to low iron. We had the ability to hire a maid for the month which really helped. And we also had 4 weeks of meals from other moms, which was a huge blessing as well. I didn’t even know people did stuff like that when I had my first and I am sooooo grateful for all the help. And family who was in town for 4th of July came and spent several days helping to build the garage.

An acquaintance of mine from the same mom’s group that brought us dinner brought me two giant bags of clothes in size 3-6 & 6-9 months for the Little Man. That was so helpful, especially since he’s been blowing through sizes at about 1 per month!

School also started this month and I’m so glad that I am home to be able to homeschool instead of dropping her off at school this year. Again, so blessed.

The last of our brothers were married in September. Both named James. One week apart. All 3 of our kids were in MY brother’s wedding and we are so glad to have both of them as sisters-in-law! 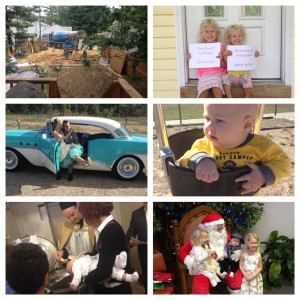 My crazy middle child turned 3. We took her to the Great Wolf Lodge thanks to the ability to buy passes for charity. She also had a bit of a maturity growth spurt–praise God!

Hubby and I celebrated 12 years together this year and the dear Little Man was finally baptized. The baptism party was the most fun we’ve had — a ton of friends came this year.

Another debt free Christmas! I had intended to only get 3 gifts each (not including the family gift & pj’s), but I got such awesome deals at Kohl’s on Black Friday week that I added an extra one.

And these are just the big blessings that I remembered months and months later. We’ve been blessed beyond belief this year — we even had our most profitable month ever in our business!

What was your biggest blessing in 2013?

This is part of the Schoolhouse Review Crew Year in Review Hop.