*** This article originally appeared in the Fall 2012 issue of Traverse Bay Family Magazine.  It is reprinted with permission.  ***

We are pretty big on building a family culture and so having a family Halloween costume theme is a habit that I am going to try to foster for as long as I possibly can. Since my kids are only 4 and 2, they don’t know any better :). That being said, there are some great themes that can be used for any family with any age children.

To help get resistant kiddo’s on board, try looking at costumes at Costume Express for inspiration; they have great costumes for all ages. Be sure to filter by age, though. Some adult costumes can get a little sexy and may not be appropriate for underage viewing. You could also pin favorite costumes on Pinterest and present them that way.

Wild west is a great family theme because Toy Story lovers will be able to have Woody or Jessie and it’s super one of those themes that doesn’t require adults to purchase a whole costume, but just some accessories. I love those kind of costumes!

We did African safari one year. My littlest was a lion (I loved that suit!) and my hubby and I were lion trainers – we bought hats and an Indiana Jones style whip and just wore khakis, white shirts and boots. Easy peasy lemon squeezy!

I LOVE The Incredibles; talk about a great example of family culture! They would be extremely easy to pull off, too. Red pants & shirts, black shorts, boots, a logo and a mask. Done. 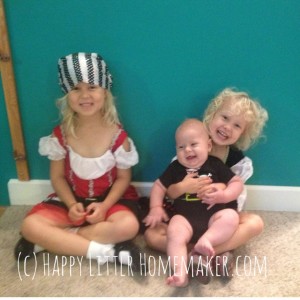 Pirates was our family theme last year. Hubby & I repurposed some reenactment clothing we had and added some extra pirate-y bling, eye patches and other accessories. We bought the girls pirate costumes and they used them for dress up for the next year. The costumes that are used every day are great. If you have all little girls, you could do a Disney princess theme. I found Snow White for the younger and the older is requesting the same. It would be easy for me to be the wicked queen – I think I have an old witches dress I can reuse and hubby could be the woodsman. If you have younger boys, you might be able to talk them into being dwarves . Pick a princess and see if you can get the whole family in on the Disney princess fun!

Pick a time period and go for it! If you have little girls who love princesses but boys that won’t go for it, try medieval costumes. He can be a knight, she can be a princess. Win-win! We used to do reenactment camping of the Fur Trade era so hubby and I have clothing and all the girls need is a calico dress. You could also pick the 50’s and go as greasers & in poodle skirts. Hooray for saddle shoes!

Wizard of Oz is another fun movie theme. The tin man, a lion, a scarecrow, Dorothy, a dog, munchkins, a witch, flying monkeys, the wizard. There is someone for everyone in your family and it’s another frugal group option.

Not only are superheroes big this year, but there are girls and guys. If your little girl doesn’t have a favorite superhero, create one! I’d be the milk mama — I make milk, what’s your super power ;).
Have more family Halloween costume theme ideas? Share yours in the comments! I’d love to see photo’s, too!

This post will be linked to List-It Tuesday (FKA Top 10 Tuesday) @ Many Little Blessings.