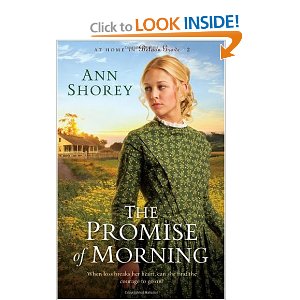 The Promise of Morning is the second in the At Home in Beldon Grove series by Ann Shorey.   Ellie Craig is the wife of a preacher in the Illinois frontier.   Life on the frontier isn’t easy and she mourns over the graves of her three infant children and pines for a family and identity of her own.  Her husband, Matthew, faces controversy in town when a man arrives and starts to slowly take over his church.

This is the first book from Revell that I was less than thrilled with.  I hate saying that.  I love books so much that it pains me to admit that some aren’t very good.   Unfortunately, this was one of those.   There were several things that kind of irritated me.   First, I really didn’t like Matthew.  I thought he was overbearing, unreasonable and kind of mean to Ellie, along with being kind of a wimp when the new guy came to town.  He also seemed to choose some pretty stupid hills to die on, as the expression goes.   But, I will say, I came to like him a little better as the book went on.

It also seemed to me that the general townspeople, their family included, were a little too flighty on things that mattered and stubborn on silly ones.  I would think they had more skepticism and common sense.   Granted, the whole storyline hinged on the silliness of the people and their decisions, but I guess I just didn’t like it.    I did like the happily-ever-after bit at the end, which did redeem the book a bit.

I really wanted to like it.  I love books published by Revell!   This is the first book of theirs that I’ve read that I felt was a dud.   I haven’t read the first in the Beldon Grove series so it’s possible that this maybe isn’t a great read alone book.

Thanks to Revell for providing a copy of this book for review.