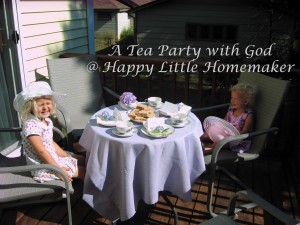 A few months ago, I did a review of Catholic Family Fun and I had been wanting to do the Tea Party with God activity in the last chapter.   One morning, we all got a super late start and instead of making breakfast, I decided we would have a brunch tea party with God.

I got the girls dressed in play dresses and got out their Easter/church hats.   I even put on a dress and put on my floppy beach hat. 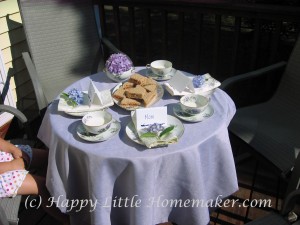 Several weeks before the party, I found a HUGE set of china for only $200 and Lil’ Bit had been bugging me for weeks to use them.  I got out and rinsed/wiped several plates, tea cups and saucers.

I found some cardstock downstairs and folded them in half & wrote our names on them.   Lil’ Bit decorated them with glitter glue while I hunted down a purple tablecloth and some napkins. 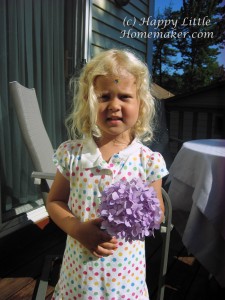 My hydrangea bush was in bloom with beautiful purple/blue flowers and we cut off a big one and put it in the sugar bowl.   We also cut off a tiny one to put on each person’s plate.   She had been wanting to pick those flowers, too! 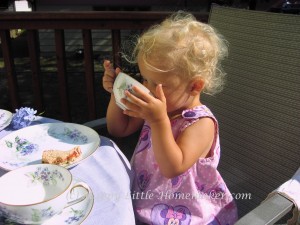 Since it was so hot, we didn’t make actual tea, but instead had milk in our tea cups with peanut butter & jelly sandwiches and I even cut the crusts off.   For dessert, Lil’ Bit picked out mini cupcakes.

Why was this tea with God?   We opened with traditional grace and our morning offerings, followed by the our father.   Then I asked the girls if they could think of anyone we should pray for.   Lil’ Bit managed to come up with a few pretty good ones.   We had barely finished and she told me she wanted to do it again the next day!

All in all, my girls were super excited to use our new china and have a fancy lunch.   Even running up and downstairs to get linens that were stashed all over the house, I still managed to put this together in under an hour.  Think out of the box and use what you have.  If you don’t have any of the supplies but would like them, I love to look at estate sales and after holiday clearance sales.

Have you ever had a tea party with your kids?

This post will be linked to Family Fun Fridays @ Snoring Scholar.

2 Comments on A Tea Party with God…in Under an Hour!

1Pingbacks & Trackbacks on A Tea Party with God…in Under an Hour!