I love historical fiction and I have lived on one of the Great Lakes my whole life. I am a “collector” of lighthouses and so when the opportunity to review Hearts Made Whole came up, I was pretty stoked. I mean several of my favorite things all wrapped up in one book? Yes please! 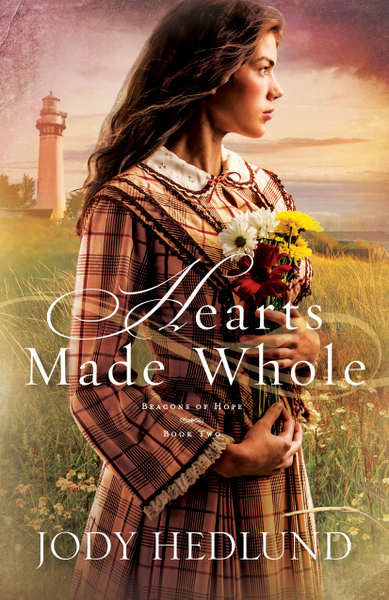 Hearts Made Whole is the story of a woman who is running a lighthouse on Lake St. Clare after the death of her father. Because of her infirm sister and 3 siblings, she is desperate to keep the job. The head lighthouse guy hates her being there so after the war, the job is given to another man. Despite his many failings and struggles, she grows to love him.

I wish I could say I loved this newest novel by Jody Hedlund. The setting and her description of it were spot on. A few things bothered me though. First, it felt like her friend, who ends up playing a kind of important piece at the end, wasn’t introduced soon enough or often enough. Such a dear & important friend should have had a bit bigger role.

Also, the sheer number of not so nice things happening and her practically nonexistent response to them until there was literally a knife in someone’s side was a little irritating. Even then, she didn’t have much backbone but was desperate to do whatever she had to in order to sacrifice for her family. But I can’t believe she had no options anywhere. Obviously, she had friends.

I think the most annoying thing was her attitude toward the new lighthouse keeper. I’m not opposed to mercy, but this dude had problems. Big ones! And she had 4 siblings to take care of. Practically speaking, he was a loser who needed to clean up his act before he was a fit husband. Don’t get me wrong. Underneath, you could tell he was a good man. He had some demons to address, though, and she wasn’t in a good place to be able to focus on helping him with that without endangering others.

I got the impression that had the events been different, she still would have married him & all his baggage. She was willing to do all sorts of dumb things to care for her siblings, but wasn’t likely to do the ONE smart one (stay away from him). I prefer a strong, smart lead woman and she just didn’t fit that bill for me.

Don’t miss Jody Hedlund’s new book, Hearts Made Whole, a story of loss, forgiveness, hope, and true love set in 1865 Michigan. When Ryan’s failings endanger others, he and Caroline realize he’s in no shape to run the lighthouse, but he’s unwilling to let anyone close enough to help. Can Caroline forgive the hurting man who costs her the role she loves?

Celebrate the release of Hearts Made Whole by entering to win an Afternoon at the Beach prize pack and RSVPing to Jody’s June 23rd author chat party!

One grand prize winner will receive:

One second-place winner will receive:

One third-place winner will receive:

Enter today by clicking the icon below. But hurry, the giveaway ends on June 23rd.Winner will be announced June 23rd at Jody’s Facebook party. RSVP here!

If you read Hearts Made Whole and disagree (like everyone else on GoodReads :D), I’d love your take on the lead male/female relationship. Leave me a comment!