My youngest daughter is completely different from her older sister.  My oldest is calm and totally into workbooks and things.  My younger daughter is more about learning via osmosis.  Or computer.  That will do it too :).   When the opportunity came for reviewing some items from one of my favorite homeschool companies The Critical Thinking Co., came, I was so excited to see what we could add to our shelves :). 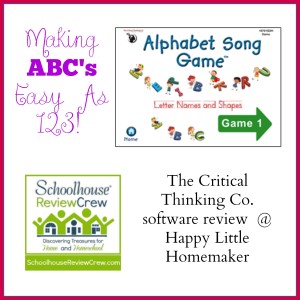 Well, we didn’t end up adding to our shelves, per se, but added to our computer!  We received a copy of Alphabet Song Game, a program for Windows (available on iPads, also).

I am not one of those people who is good at logic or critical thinking.  Ask any of my high school teachers or my parents :).  I fell for a lot of nonsense and it didn’t take long for me to decide there had to be a better way.  Even if it was too late for me (I couldn’t find a college class on it; wonder why? Ahem), I decided that I would find a way to teach my kids.  I don’t even remember how I found The Critical Thinking Co, but my oldest wasn’t even in PreK yet.

The Critical Thinking Co began producing books to sharpen the mind as they teach math, science, writing, history and more in 1958.   Since that time, they have received numerous awards for many of their products. Always fun and educational, they lead you through not just learning facts, but thinking about the facts and understanding them.   If you are in the mainstream education system, this equates to better test scores.

To facilitate our review, we were sent a download copy of the Windows version of Alphabet Song Game.  It is also available for iPad devices but not the iPhone.

How We Used The Alphabet Game

We used the Alphabet Song Game on my laptop with an external mouse about 3-4 times a week on average with my 4-1/2 year old.   I have to admit, wasn’t a fan at first.   The lessons start out with singing the ABC song.  While it is singing, the letters move across the screen & into the ribbon at the top.   When it’s done, the child is to click on the letters of the alphabet, in order, from a set of three.   There are 9 lessons for uppercase, 9 for lower case and 4 for mixed case and they get progressively harder. 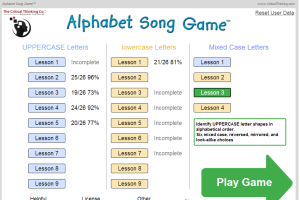 The levels for uppercase & lowercase letters are:

The mixed case lessons are to ID a letter from a choice of 6, some with reversed/mirrored letters and some just normal, with a lesson each for uppercase & lowercase. 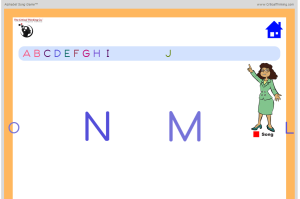 I have to admit to being a bit of a ditz because I totally missedthe box above the Play Game button that tells you what the level consists of until I started writing the review.  We unwrapped the levels like a present :).  In doing so, I wiped a bunch of her scores because it only lists the last attempt, not the best or last completed, which I dislike.

I also have to admit ditziness on my part for how frustrated my daughter and I got at first.  I didn’t realize that you could do any lesson. I thought the lessons were not available unless you completed them in order.  My 4-1/2 year old daughter got extremely frustrated because we never teach the alphabet inorder.  It’s always random.  On one hand, they always KNOW the letters, but on the other hand, alphabetical order skills come later.  I really consider that about a first grade skill.  And in many of the levels, you need to get them in alphabetical order.   So we spent a good three weeks on lesson 1, playing the game 2 or 3days and spending the other three on alphabet song/alphabetical order practice with physical letter puzzles, cards, charts, etc. 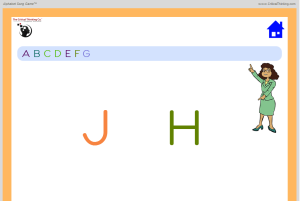 Once we crossed that hurdle and it clicked, she rapidly progressed and spent between 1-3 days on each game before it stopped asking her to play again and instead gave her the option to play the next game or play the current one again.

Now, our version of this game was the windows version, but my kids have very elementary computer skills because I really limit screen time.  It is available for an iPad also and this would be much better for us.  But we don’t have one.  Yet :).  That being said, my daughter did pretty good.   The mouse area is pretty forgiving, but some indication that you clicked wrong (instead of just NOTHING), would be nice.  There were times where both she and I thought she clicked on the correct choice, but it didn’t register.  So she then clicked on a wrong choice and got an extra problem wrong.

Overall, both my 4 year old and I liked The Alphabet Game.   There were a few hurdles to overcome to begin with (mouse skills, software familiarity, alphabet order), but once we started working on those skills and took a bit of a break, it was fine.  Once we had the mouse skills and the alphabet order better, she enjoyed the game quite a bit and frequently asks to do her computer school.

In fact, while I was looking up the lesson topics, she heard the song and came running so fast, I thought she’d run head first into the counter :).    As a mom, I like that she can work it more or less independently once she has the skills, though we did work it together quite frequently — she pointed and I clicked :).  She seemed to “get it” more that way.  I also like that it has the harder lessons for letters in reverse and similar but wrong choices because that was really an issue for my oldest.   We are teaching cursive in hopes that it will not be as much of an issue but if not, I’m glad to have this tool in my toolbox to help with that visual discrimination.

See what other crew members thought of this and other Critical Thinking Company products!