I was put in touch with Susan Case Bonner by a friend of my husband’s. He owns a book publishing company in town and her book My Whole Self Before You won his Moonbeam children’s book award. After we spoke & discussed various marketing and mommy blogger ideas, she put together a package of items relating to My Whole Self Before You. She sent a copy of:

When I first received it, I was under the impression that it was a Catholic children’s book, but its not. It’s the only book I’ve seen that could be used by Catholics and Protestant equally. Everyone says the Our Father; it’s just called different things. She also separates the Doxology from it and makes a note that its a difference between Catholics and Protestants. Really she is just rephrasing the prayer for easier understanding.

My Whole Self Before You was the original (I think) and its a picture book that rephrases The Lord’s Prayer / Our Father so that kids really understand the prayer they have memorized. It’s a lovely hardcover book with pictures of children and stained glass windows. At the end is a guide for prayer and devotion with 80 (!) discussion points.

The Picture Prayer Book version is the same book minus the prayer guide. The Prayer Guide Devotional is a spiral bound version of the discussion points only. If you only buy one, get the original. It has both pieces and therefore a longer useful life. If all your kids are older, the Prayer Guide/Devotional will probably be sufficient.

As a book, on its own, I’m kind of lukewarm about My Whole Self Before You. I’m not a fan of books with photographs or kid photos in them. Not sure why, but its a personal taste thing for me. But, she breaks down the ideas in the Our Father as a rhyme. And a well-done rhyme at that!

When I read it to my 6.5 year old after a hiatus, she said, “It sounds like a prayer.” When I explained that its the Our Father broken down into easy to understand words. I read her a verse or two and how it corresponded to the prayer and she all but ripped the book from my hands so she could read the whole thing. She had hit a point where it clicked, you know? So I would say that having the study guide for ages 8-12 (3rd-6th grade), is probably pretty spot on.   She gets it at 6, but not enough to do a full fledged study of it. 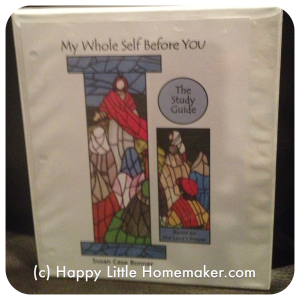 Where I really get excited about this book is the Study Guide. The study guide contains 80 2-page lessons that really go into depth as a bible study. The study guide comes shrink wrapped & 3-hole punched and is non-reproducible. It’s intended for grades 4-6 and digs deep into the bible as it relates to aspects of the Our Father. My daughter is several years too young for it, but I’m excited to use it when she is. You could get through it in a school year if you did 2 lessons a week. There are even extra activities on their website. 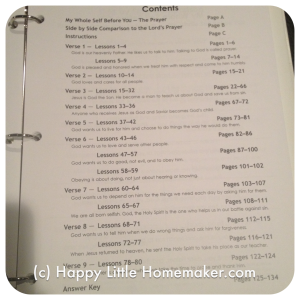 The worksheets do not appear cumbersome to complete, but look like they would provide deeper understanding & relationship with God. As I said, I have not USED it yet, so I cannot tell you if there is anything contrary to Catholic (or any Protestant) teaching in it. There is an endorsement from the superintendent of our area Catholic schools and they are presenting it to the schools soon so take that as you will. 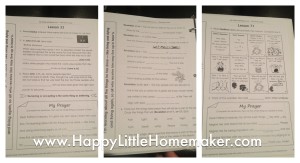 Overall, My Whole Self Before You is a book suitable for both Catholic and Protestant families. While I’m not a huge fan of the picture book portion on its own, I think the Prayer Guide & Devotional as well as the study guide could be awesome tools for your older elementary student. I’m excited to share how we like it in a few years!