Much like when we hit our teens & twenties wall, we are hitting a wall with addition and subtraction math facts. Many curriculums (especially online ones), teach strategies for problem solving and totally ignore memorization. In my opinion, its totally necessary. When the opportunity to review UberSmart Math Facts came up, I all but begged to be included.

We were give a beta copy of the newest version of UberSmart Math Facts by UberSmart Software. I had installed a trial of the last edition and it was fairly similar looking. ÜberSmart Math Facts is a piece of software that you download and install on your local computer, though techies CAN set it up on a server environment if desired. It is essentially a software version of addition, subtraction, multiplication and division flash cards. For Windows machines only, the software is $24.95 and is intended for about kindergarten age to adult. You can install it on as many computers as you want in your home, but the number of students is limited. Recommended use is 2-3 sessions of 10-15 minutes.

So the UberSmart Math Facts software has some really cool features. First, it has a diagnostics test and once it determines that you don’t have certain knowledge, it ends. Quickly. There is a keyboard skills practice and it will tell you when you’ve mastered keyboard skills and can move on to practice. It considers mastery to be 3 seconds for a 2 digit number, as an FYI. 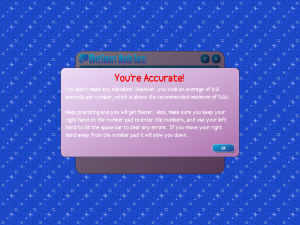 It also has a neat dot card drill for addition facts that would be great for child just learning addition. Kindergarten maybe? Instead of typing an answer, they select one of 4 tiles with the answer in dots. In addition, there are flashcard style mastery drills. You can see the problem before and after as well as a visual of problems & time remaining. 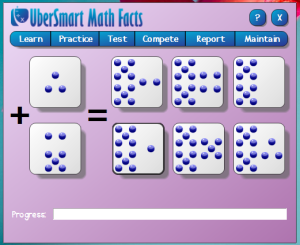 I kind of wish they had a “start here” thing. First thing to do? Go to Test and do a beginner assessment test. Beware; its LONG. But it cuts you off quick once you don’t pass something. My 6 year old spent almost two weeks on keyboard entry because of her keyboard skills (or lack thereof). Our primary computer is a laptop so I bought an external 10-key pad for entry. It didn’t help much. 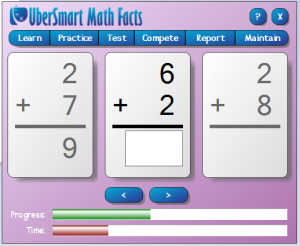 Finally, I had her start doing drills for the easy problems anyway. I had the time set to max and even once she had mastered the 10-key pad, it was still torture. For both of us. This particular child is the one who is only quick when it will bug her siblings. I literally had to bite my tongue while watching her. She would eventually read it, then count it out on her fingers (if necessary), then trace around every single key on her way to the number(s) she needed. I tell ya. At this pace, we only did it for one session of 10 minutes 3-4 days a week. We stuck it out as long as we could to get a good basis to review from.

The only thing *I* disliked was that it was software and not an online program. I literally had to switch computers mid-test period. It was a real bummer that all her progress (the little there was) & stats were lost :(.

While this type of drill in math facts was not a great fit for us, I really liked UberSmart Math Facts. It ran really well. It was simple and intuitive as far as the drilling was concerned and I liked the option to drill by dot cards or by flashcards. I really thought that because she is such a visual learner that it would have worked better than it did. 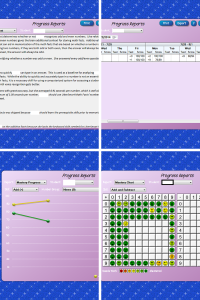 I also liked the varied styles of reporting. The visual grid chart did seem to help my daughter realize that she had mastered more than she thought but it was still like pulling teeth to get her to do it.

If you have children who enjoy flashcard drills, beating the clock or similar forms of motivation, UberSmart Math Facts will probably work well for you. Good keyboard and computer skills would come in handy, too.

Click here to see what other members of the Schoolhouse Review Crew thought about UberSmart Math Facts.

Do you make your children memorize math facts?  Why or why not?