Recently I requested a copy of the NIrV Adventure Bible for Early Readers from Book Look Bloggers. I know that this is not a Catholic Children’s Bible, but I’ve reviewed one of those and it’s not perfect either.  My 6.5 year old is starting to be a fairly proficient reader and it would be nice to have a bible she can read on her own. She has picked it up several times all on her own. Once I even heard her reading the creation story to her younger sister. 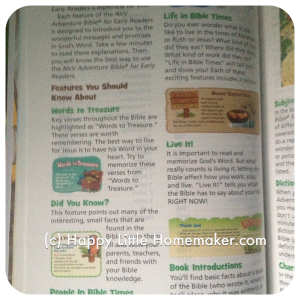 The NIrV is the New International REVISED Version of the bible. It is slightly different from the NIV which was the basis for the Catholic Children’s Bible, which is leaves a lot to be desired for that reason. I didn’t go through every passage on this list, but did notice that several passages were better than the NIV, the large missing chunk of John was there and some of the references of Satan being called the Morning Star were clarified from NIV. There were still missing verses and poor wording, but in my opinion NIrV is superior to NIV. It’s superior enough that even though its missing 7 books, I still prefer her to use the Adventure Bible for Early Readers over the Catholic Children’s Bible.

Translation aside, the Adventure Bible for Early Readers is a wonderful bible. Having a hard cover really helps with durability. That cover is the first line of defense from baby brothers and wear and tear in general. Plus, its just plain easier to use. My version had the special edition 3D cover, which was pretty cool. 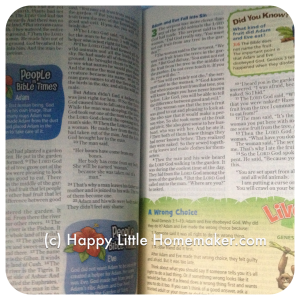 The Adventure Bible for Early Readers is intended for children from 6-10 years old and retails for $25-$40 depending on the type of cover and location purchased. Inside it feels much like a regular bible. The text is broken into 2 columns per page with headings just like in a regular bible. The print is still fairly small, but the pages are a little thicker and have splashes of color.The chapter numbers are color as well as all the special breakout boxes. There is a feature called Words to Treasure highlighting verses worth memorizing and Did You Know? that points out interesting facts. My favorite is Life In Bible Times, though, because we are supposed to read the books through the lens of the time & culture during which they were written.

Overall, I liked the NIrV Adventure Bible for Early Readers. It’s not perfect, but I like the readability factor as well as the consistency in things like place names so kids aren’t confused. I am also impressed with the fact that they are very open with eliminated verses & why in the beginning. I disagree with their reasoning, but I like that they are up front about it. Despite the missing books, I would recommend it over the Catholic Children’s Bible due to the better translation, but that’s just my opinion. Either way, it’s worth checking out and ideal for a first REAL bible.