I love the curriculum from Logic of English! When I had the opportunity to review another of their products I was very excited, especially since I had two of them on my purchase list for the fall. Since I was selected to review Rhythm of Handwriting Cursive – Complete Set, I got to teach her cursive before we begin Essentials in the fall.

To facilitate my review, I received the complete package of Rhythm of Handwriting Cursive. Rhythm of Handwriting Cursive includes a student workbook, a laminated letter/stroke guide, an 8×10 dry erase board, and a set of cursive tactile letters on a heavy card stock. If you have used any other LOE curriculum programs, you will notice that they are written in green, just like the cursive cards are for Foundations & Essentials :). The kit retails for $64 with the larger dry erase board. This kit is intended for any age student who desires to learn cursive (or whose parents desire that they learn cursive ;D)–we used it at age 6-1/2. 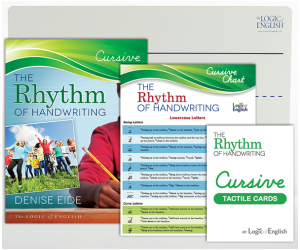 I will start off by saying that my daughter despises penmanship/copy work. She did when it was manuscript and some friends suggested that cursive may be easier for her. I suspect that her distaste for writing may be related to the fact that she does not excel out of the gate–in HER mind.  In fact, after several conversations about how God made it so that we have to practice things, she informed me that if SHE were God, she would have us “come out of the womb being able to write in cursive.”  But I digress. I really wanted to start her with cursive because she had started to read proficiently and started writing letters backwards. And it’s really hard to do that in cursive :). 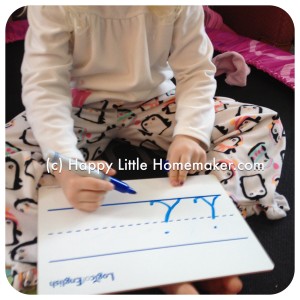 Each day, we would learn a new letter (unless it was a practice lesson). We got out our tactile cards and traced the path of the letter until she got a feel for it. Then she would try it out on the large side of the dry erase practice board. She would usually take 3-7 tries before she got the feel of it. Then I would have her pick any two lines in the workbook and practice. If you are still trying to reinforce vowel sound in reading, the tactile cards have the vowel sounds on the back just like the phonogram cards for Foundations do. 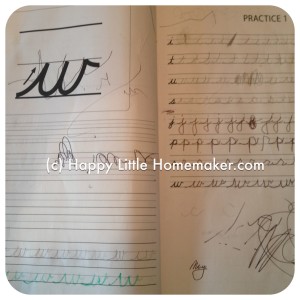 The Rhythm of Handwriting Cursive workbook pages cover contain 8 lines in 4 different sizes for practice. In addition, the tactile cards contain types of lines used to write in cursive as I have seen it appear in Foundations A. The student book skips right to letters, though. Beginning with lower case, it starts with curve letters then review, followed by swoop letters and more review. After that, students begin connecting letters and move into loop letters and bump letters before graduating to uppercase letters and numbers. 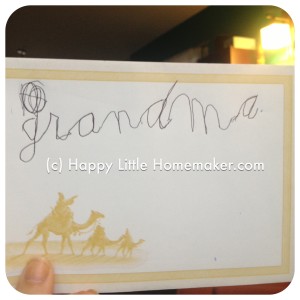 Now. I’m not going to say that this curriculum made my child love handwriting. It’s still a struggle and I’ve moved it to the LAST thing we do so her procrastination doesn’t affect the rest of my day. But. BUT! She was writing envelopes to her grandparents last weekend and wrote a cursive “I.” Then she decided to write their whole name in cursive. She walked to her drawer and got out the letter chart and proceeded to teach herself g, n and m. Giggling like a hyena the whole time.

And after 3 lessons of understanding how the letters are written, she was suddenly able to read cursive writing wherever she saw it. I’ll take that, too.

Overall, I really liked the Rhythm of Handwriting Cursive curriculum kit from Logic of English. The way they lumped the letters together made sense and the review sections were well placed. The tactile letters and large lined, thick white board were great additions, too, making it a little more of a sensory experience for tactile learners.

Since we used & loved Foundations, using ROH was a natural extension to learning cursive before starting Essentials in the fall. I’m glad we did it that way instead of starting them at the same time. We will be continuing this program throughout the summer, hopefully completing it by August 1.

Click here to read reviews of Logic of English curriculum including Foundations & Essentials from the members of the Schoolhouse Review Crew.