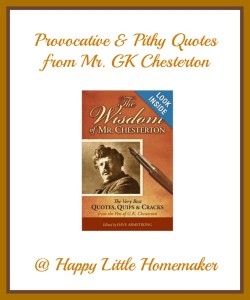 Are you regularly in search of quotes? Maybe for your Facebook page or blog or even Instagram? I have a mental collection of quotes & as a high schooler, I had a book of them. One thing I’ve noticed is that some of the most interesting ones come from GK Chesterton.

I have not made the time to read most of Chesterton’s work as I’m afraid of my brain turning to mush. I have read the Father Brown mysteries which were highly enjoyable. So when I noticed The Wisdom of GK Chesterton as a new release from St. Benedict Press, I had to request it. This was nothing like I thought it would be; it was better!

A prolific Catholic author & apologist, GK Chesterton seemed to specialize in pithy statements, often exposing fallacy by turning it inside out. The Wisdom of GK Chesterton is a collection of short sayings on a variety of topics. Everything from abortion to feminism, dogma to work and even more subjects you never knew Chesterton had an opinion on. Like,

A child is a human being who has not yet grown up; to hear educationalists talk one would think he was some variety of deep- sea fish. (on education)

A man of no ideas will find the first idea to fly to his head like wine to the head of a teetotaller. (on ideas)

The Wisdom of GK Chesterton is one of those books that is best suited for stolen moments. While nursing, getting ready for bed, or, dare I suggest, the restroom, would all be great times to glean tidbits from this book. It’s a fabulous way to be introduced to Mr. Chesterton without having to expend a lot of brain power on it, yet still become familiar with his writings. If you are interested in GK Chesterton, but short on time, I suggest adding The Wisdom of GK Chesterton to your library!