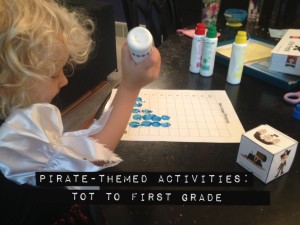 Our family LOVES pirates.  The first time my husband & I heard about International Talk Like a Pirate Day (September 19) on the radio, we were smitten!  When we had kids, my daughter became obsessed with pirates thanks to Peter Pan.  We decided to make a day of it, dressing up like pirates, watching pirate movies & listening to pirate music.  Since we started school, Talk Like a Pirate Day has morphed into full-on Pirate WEEK.  One year it even coincided with a tall ship festival & pirate pancake breakfast!

Here are the resources that we’ve used for Pirate Week from Age 3 – early First Grade. 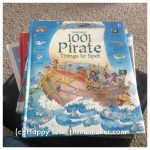 Do Pirates Take Baths?
How I Became A Pirate
Port-Side Pirates
Puzzle Pirates 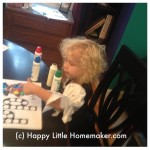 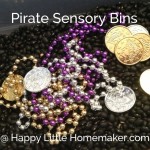 The Pirates Who Don’t Do Anything Soundtrack
Pirates of the Caribbean – Swashbuckling Sea Songs
Jake & the Neverland Pirates – Pirate Rock (We don’t have this, but the girls would love it!) 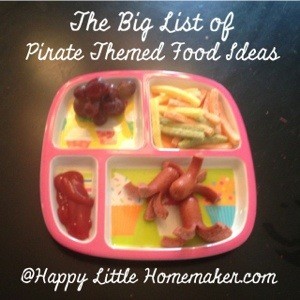 Our kids love to play dress-up we bought some halloween costumes one year.   They got a ton of use, were washed many times & are holding up pretty well.

And when we pick a theme / obsession, we go all out.  This year we started collecting the Playmobil Pirates toys for Pirate Week.  We also already had the Musical Bucky from J&TNP that they are playing with, too.

We also had Jake & the Neverland pirates coloring books & stickers from Lil’ Bit’s last birthday.  Those are pretty easy to find at Walmart or Dollar Tree.

What do you use for your tots-first grade for pirate fun?