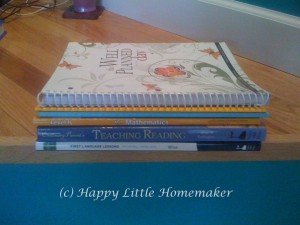 Earlier this summer, I shared the Kindergarten curriculum & books that worked for us.   Today, I’m going to share the resources that we decided to stop using.

Blessings Every Day: 365 Simple Devotions for the Very Young

These were starting to get a little simple for my 5 year old and we just never got to it.  I will probably get them back out when my younger is 4 — she LOVES flipping through the book.   Let’s just say it’s well worn.

Lil’ Bit would work through this but it just bored her to tears.   While she was capable of reading for a long time, it wasn’t until she would ask questions and we would tell her to read it to find out (signs, calendars, etc), that she would bother to try.   Even now, she hates to read full fledged books even though she can.

Nothing wrong with this curriculum, but Logic of English Foundations A includes handwriting and I’ve decided to switch her to cursive instead of printing which she also dislikes doing.

We decided that it was really TOO simple for her.  Especially once she master the counting to 100.  This curriculum helped her scale that wall, I think, but then became too simple and repetitive.

Ridiculously simple.  A four-year old could work through this.   She would have done the whole book in a week.  I’ll save it for the little one in preschool — maybe sooner!   Bummer, but I’m finding that most specifically Catholic curriculum is really not worth buying–I like something more academically rigorous.

What curriculum have you tried and decided to abandon?  Why?