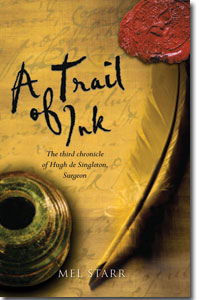 Some valuable books have been stolen from Master John Wyclif, the well known scholar and Bible translator. He calls upon his friend and former pupil, Hugh de Singleton, to investigate. Hugh’s investigation leads him to Oxford where he again encounters Kate, the only woman who has tempted him to leave bachelor life behind, but Kate has another serious suitor. As Hugh’s pursuit of Kate becomes more successful, mysterious accidents begin to occur. Are these accidents tied to the missing books, or to his pursuit of Kate?

One of the stolen books turns up alongside the drowned body of a poor Oxford scholar. Another accident? Hugh certainly doesn t think so, but it will take all of his surgeon s skills to prove.

So begins another delightful and intriguing tale from the life of Hugh de Singleton, surgeon in the medieval village of Bampton. Masterfully researched by medieval scholar Mel Starr, the setting of the novel can be visited and recognized in modern-day England. Enjoy more of Hugh s dry wit, romantic interests, evolving faith, and dogged determination as he pursues his third case as bailiff of Bampton

I recently had the opportunity to read the book A Trail of Ink by Mel Starr.  It is the third chronicle of Hugh de Singleton, Surgeon, but the first one that I have read.

I really didn’t know what to expect when I first picked it up and was quite surprised as to the style in which it was written.  I don’t often read books written in anything other than a modern conversational style.   It wasn’t a stretch, though–it was very easy to read.   The book was written from a first person POV and was written as if he was recounting the story.  At times, something would happened and you’d see things like “little did I know that … “.

It was a murder mystery set in 14th century England in before the Protestant Reformation and it was rich in ancient Catholic culture.  One thing that I always enjoy is a bit of an intellectual mystery.  It wasn’t gruesome and the Hugh was very matter of fact about many things and was discrete enough to not give gory details.   I was fascinated by the setting regarding the studies, abbey’s, monks, and other bits of medieval culture.  I also enjoyed the courting from a bumbling old bachelor’s point of view.  It was quite sweet :).

Overall, I really enjoyed this book and will be looking for the other two and looking forward to the next one.   I would recommend this book to anyone who likes historical novels, especially medieval England.   Very fun book!

Sound interesting?  Find out what others on the blog tour thought!

Disclaimer:  A copy of this book was received by LitFuse Publicity in exchange for a review of this book.

3 Comments on Book Review: A Trail of Ink

1Pingbacks & Trackbacks on Book Review: A Trail of Ink