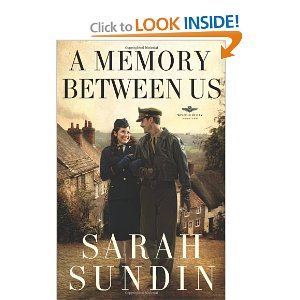 I was thrilled when Revell gave me the opportunity to read the second book in the Wings of Glory series, A Memory Between Us.    I loved A Distant Melody and was excited to see what was going to happen next.   This book did not disappoint.   I really love when authors have a series that can also be read on their own.   This one does that wonderfully.   There is short references to the previous book, but mostly to names and people.   She doesn’t make extensive drawbacks on the other book that make you think you’re on the outside of an inside joke or issue — I like that.

I also loved the character development of Major Jack Novak and Lt. Ruth Doherty.    Have you noticed that I always complain when characters are poorly developed?   Anyway, I really felt she did an excellent job making these characters and their struggles and their development, real and believable.   I loved how they fought for and against each other and how their friends interacted with them.   I believed it all!   None of it was too pie in the sky and she also did an expert job of making the religious tie-in very subtle and natural — very like real life.

I would greatly recommend this book to anyone who is a historical romance lover or who likes stories set in World War II.   I don’t know that I’d quite go as far as recommending it to a man, but it’s probably the closest thing that I’ve read that a man would read.   It would probably be an excellent book for those women who aren’t really into “romances.”   It’s not that this book isn’t romantic, but it’s not saccharin and phony feeling — it feels like life — but safer :).

Available September 2010 at your favorite bookseller from Revell, a division of Baker Publishing Group

3 Comments on Book Review – A Memory Between Us

2Pingbacks & Trackbacks on Book Review – A Memory Between Us