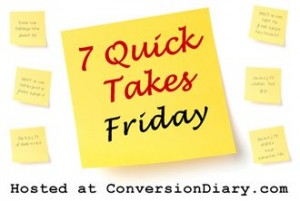 I’ve been kind of sparse around here lately, because I haven’t been feeling that great.   Unbeknownst to me, you can get baby blues when you are nursing for a long time and the baby/toddler starts the process of weaning.   Who knew.   So I’ve been slowly going insane and hope I’ve found the answer(s).

That being said, I have used some of my bookkeeping money to join a gym as one of my “cures”.    I’m obviously not as young as I was because a 1 hour Pilates class makes the following hurt:   biceps, pecs, triceps, abs, obliques, hamstrings, glutes, lower back, quads, hip flexors, and and and.   Yeah.   On the bright side, though, I feel WAY more awesome mentally than I have in MONTHS.

We spent HOURS setting up for the yard sale yesterday (it was supposed to START yesterday), only to be COMPLETELY rained out.   A big rain cloud is just swirling out over us, not going anywhere.   So we’ve rescheduled for next Thurs/Fri/part Sat.

But a lot of it is outside under the tent (most of it), so I’ve been downstairs this AM, giving the stuff we ARE keeping a permanent home.    Or at least organizing it so it looks clean.   Some of my empty totes are outside with yard sale junk in them so we didn’t have to make a billion trips, so I’m not completely finished.   Bones was very disturbed at sheer amount of weird crap we had–like a 4 foot high stack of binders.   Yeah.

And I suddenly realized that we needed to think about Halloween costumes.   I’d like to do a 50’s poodle skirt deal and I have a pattern for me and all the stuff Bones needs to be a greaser but they don’t make a pattern for kids her small like that.   And I can’t sew that much in two months.   I have a huge pile of sewing to do and I’m not that good at it.  We will only be able to pull it off it my MIL can/is willing to try to modify a size 3-4 pattern to fit Lil’ Bit.   Hmmmmm…

I’m really excited that Bones put in all the themes I found in the spring so I can change my look.   I really didn’t like the look and now that it’s my primary only site, I’d really rather it look like I want.    So stay tuned for some new colors and please excuse the dust while I’m tweaking it.

I think Lil’ Bit is teething.  She is grumpy, not sleeping well, and sticking her fingers in her mouth and chewing. She has a TON of teeth.   What in the world could possibly be coming in now?   She has all her front teeth, including the pointy ones and a set of molars.  Is there another set already?

Anyway, thanks to Jen, the hostess with the mostess.   For more quick takes, visit Conversion Diary.com