I’ve always wanted to participate in a Tackle-It Tuesday but never set out to blog any of my cleaning. Most of my cleaning consists of shuffling stuff around. This project was a doozy & I had to share because I’m soooooo excited that we are FINALLY finished.

In the winter of 2006/2007, we (meaning my husband and brother-in-law) ripped down a dilapitated & unusable garage on our property.

Here are pics of the deconstruction process: 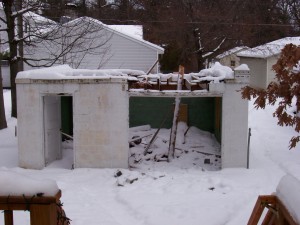 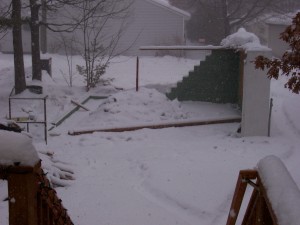 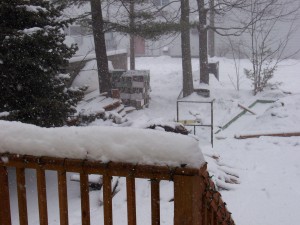 We were going to start a rebuild summer of 2007. Then we discovered Dave Ramsey and put it on hold to pay off all our debt. It was further put on hold by my becoming pregnant that spring, knowing that cash flow from yours truely would cease to exist. It still hasn’t been built, but until last Sunday, all the rubble was still there. Two. YEARS. Later. Yeah.

Here is all the rubble at the beginning of last summer:

Last fall, I put an ad on Freecycle for the blocks and amazingly enough, someone spent over a month hauling all the whole ones away (see left), a few at a time, in the trunk of an Escort. We still had this huge pile of small pieces (see right) to get rid off, plus all the wood.

A good friend had use of a trailer for the day a few weeks ago and he & DH took 2 loads of big block pieces to the cement guys pit in exchange for dinner and some gas money. Since the annual junk pick up started Monday, we hauled butt to finish cleaning it up. We filled a large garbage tote, a small (kitchen-sized) garbage can, plus 6 five-gallon buckets with small rubble and took 2 trips to dump it at a friends property about 30 minutes away. We hauled the third and final load out there Sunday and put the nasty lumber, the door and pieces of the car door out for trash day.

The rest of the boards have been stacked neatly against the wall to build my raised garden. Now if we can just get rid of my in-laws boat!

For more Tackle-it Tuesday goodness, visit 5 Minutes for Mom, who, incidentally also has a sister site called 5 Minutes for Books where yours truly won the Mothers Day Giveaway Grand Prize of, like 16 books! There’s still time to enter to win other Mothers Day goodies on 5M4M, so go check them out! Pretty good odds on some WAY cool stuff.