Yesterday, I didn’t get to participate in the day’s challenge.    DD was sick most of the weekend and I feeling a bit under the weather as well (fever and all!).    Also, my in-laws got into town Friday night and brought back most of the stuff that we left in Florida — clothes, stroller, plastic storage junk, etc.    Since we were sick, I spent yesterday putting all that stuff away and catching up on the cleaning that I didn’t do because we weren’t feeling well.

I was just going to jump in with day seven until I realized what it was.    DD’s room needs WAAAAY more than a day.    It’s kind of the dumping ground for all sorts of stuff and there are boxes of outgrown clothes, blankets, burp clothes and such needing to be packed away, all the tiny baby stuff (pack & play, swing, heirloom bassinet, etc.) PLUS all the stuff for her cousin that isn’t leaving the house until Friday.    DH’s hockey & ski equipment and my sewing machine, dumpings from the disposal of my office (lets not even go there right now).

Here is the before pic of the bathroom closet: 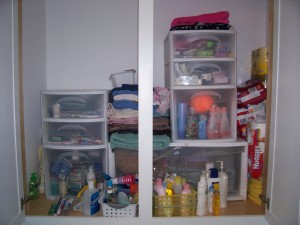 I thought I had done a pretty good job of purging when the camper came back from Florida and I took a bunch of stuff to the food pantry and gave the rest away to friends, but I still had some stuff to get rid of.   I had a few drawers left and when I cleaned off the counter in day one, I stuck all the junk in the closet :). 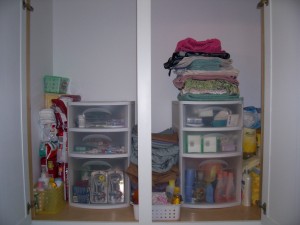 I would like to eventually get a board to put across the two cabinets so that I can pile stuff over the sheets.

I also cleaned almost everything, including the insides of the bathroom cabinets, the door, the floor, the WHOLE toilet (not just the inside).     I have about 1/2 the shower, the tub and I ignored the inside of the bathroom drawers and I’m okay with that.    It’s MUCH better than it was.

Here is my lovely master bathroom after all the cleaning was done:

The brushes don’t normally live on that washcloth–I just needed to wash them and well, they are still wet :).